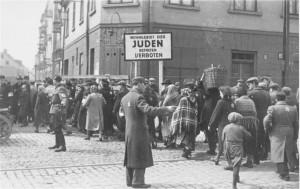 Across Germany and Nazi-occupied Europe, large populations of Jews were forced to leave their homes and relocate to ghettos chosen by the Nazi regime. As a consequence, millions of Jewish Europeans were rounded up and concentrated in specific areas. This ‘Jewish resettlement’ would become the first stage of the Nazis’ Final Solution.

In the months of World War II, there was considerable debate within Nazi ranks about how Germany should respond to the so-called ‘Jewish question’.

The NSDAP’s earliest policy, formed in the first days of the war, was dubbed the Nisko Plan. It called for the construction of a huge reservation, several hundred square miles in area, in which Europe’s Jewish population would be resettled and detained.

The proposed location for this reservation, selected by Hitler, was in southern Poland, between the cities of Lublin and Nisko. In late 1939, the SS began constructing labour camps on the rim of the proposed Nisko reservation. Jews from Germany, Austria and Czechoslovakia were shipped there from the start of 1940, to be used as forced labour.

The Nazis began planning Jewish resettlement to the Nisko territory, preparing space for one million people. One American newspaper reported they were actually preparing for double that number. But the Nisko project ran into logistical problems, including inadequate funds, supplies or soldiers. By mid-1940, the idea of a Jewish reservation in Europe had been abandoned.

Other proposals of the era suggested Jewish resettlement in some remote continent, where their influence could not reach Europe generally or Germany specifically. Africa was one suggested location. Before the war, Hitler and other Nazi leaders enthusiastically supported the idea of relocating Jews en masse to a remote colonial territory.

After the German invasion of France in 1940, one Nazi official, Franz Rademacher, drew up plans for four million ‘evacuated’ Jews to be housed on the French island colony of Madagascar. Their property would be seized to pay for this grandiose scheme. The SS would manage its operation and oversee government in this new ‘Jewish state’.

The ‘Madagascar Plan’ was popular within the Nazi hierarchy because it would rid western Europe of its Jews, while painting Germany as their benevolent saviour, delivering them a new homeland. By July 1940, evidence suggests that the ‘Madagascar Plan’ had obtained Hitler’s approval and was about to proceed – yet within weeks, it had been abandoned.

The formation of ghettos

The onset of World War II killed off these ambitious plans for Jewish resettlement abroad. Instead, the Nazis opted to gather up and confine Jews in urban ghettos (a word derived from an Italian term for areas where waste products are stored).

Under Hitler’s orders, SS commanders in occupied regions were tasked with setting aside sections of large cities, to create ghettos that would house large numbers of Jews. The buildings in these ghettoed areas were usually seized from local populations, both Jewish and non-Jewish.

These ghettos were almost always in impoverished or run-down parts of the city. They became virtual prisons: walls and barbed wire were erected around their perimeter, pathways and windows on the exterior of the ghetto were bricked up. SS guards and checkpoints were placed at every exit point while armed guards patrolled inside and outside the ghetto.

To assist with Jewish resettlement and the management of Jewish residents in the ghetto, many of whom could not speak German, the SS appointed a Judenrat, or ‘Jewish council’.

Usually comprised of Jewish elders or community leaders, the Judenrat became the liaison between Nazi authorities and those in the ghetto. The Judenrat relayed SS orders and instructions, filled work details, allocated accommodation and organised food distribution. They also ran schools, hospitals and other services with the few resources available to them.

The SS also relied on squads of Judischer Ordnungsdienst (‘Jewish ghetto organising police’), formed from bands of Jewish volunteers. The Ordnungsdienst wore armbands, carried batons, and assisted the Nazis with marshalling and deporting ghetto inmates. These ghetto police were viewed as collaborators or traitors and were despised for their corruption and cruelty.

Conditions inside these ghettos were cramped, miserable and deadly. Most SS-run ghettos were vastly inadequate for the people they contained. There was insufficient housing, shelter, water and sewage facilities for all inhabitants.

The Warsaw ghetto, for example, housed 30% of the city’s population in just 2% of its buildings – or more than 400,000 people in little more than a square mile. The ghetto in Krakow contained 3,167 rooms for about five times that number of people.

In this situation, it was commonplace for several families to share an apartment or even a single room. In the Warsaw ghetto, there were more than seven Jews per room on average; one anecdotal account has 13 people sharing one small bedroom. Some less fortunate inmates had no room and were forced to take shelter on the street.

In the first year of the ghettos, the greatest physical danger came not from Nazi violence but from starvation and disease.

The quantity and quality of food in the ghettos were pitiful. Most meals consisted of watery soups, some brewed with a few beans or grains, others with straw or grass. In the Warsaw ghetto, the daily food ration for Jews was 186 calories, the equivalent of two slices of bread. German soldiers, in contrast, received more than 2,600 calories per day.

Thousands of Jews died a slow, miserable death from malnutrition, their bony corpses left exposed in the streets of the ghetto. Starvation would have been even worse if not for Jewish children, some as young as four, who risked their lives to smuggle food into the ghetto.

On top of food shortages, a lack of effective sewage and sanitation allowed diseases like typhus and dysentery to run rampant. By the time deportations to the death camps commenced in 1942, more than 100,000 Jews had already perished within the walls of the Warsaw ghetto.

Though Poland housed the most notorious Jewish ghettos, there were other large sections across Hungary, Romania, Nazi-occupied areas of the Soviet Union, the Netherlands and the Baltic states. Some of the better-known ghettos included:

These ghettos were intended as a temporary or intermediate response to the ‘Jewish problem’. By early 1941, the majority of Europe’s Jews were being detained in a holding pattern in Polish ghettos and labour camps, while the Nazi hierarchy finalised its plans for them.

By early 1942, the Wannsee Conference had accepted the Final Solution – the mass extermination of the Jewish people – as the culmination of Nazi Jewish policy. Over the next two years, Jews would be deported en masse to either labour camps or death camps. By the summer of 1944, the dozens of ghettos scattered around occupied Europe were cleared of Jews.

“The most important task is to establish a new order of ethnographic conditions, that is, the resettlement of nationalities in such a manner that results in better dividing lines than at present. It is therefore essential for a far-sighted ordering of European life that a resettlement should be undertaken, so as to remove at least part of the material for European conflict.”
Adolf Hitler

1. The Nazis initially planned to gather and relocate European Jews into a huge reservation in eastern Poland (the ‘Nisko Plan’).

2. Another proposal was to relocate four million Jews to the former French colony of Madagascar, near Africa, to create an SS-managed ‘Jewish homeland’.

3. Both plans were abandoned with the onset of World War II. Instead, the Nazis relocated most Jews to ghettos within eastern European cities.

4. These Jewish Ghettos were closely guarded, incredibly cramped and poorly resourced. Many thousands died from malnutrition and disease.

5. In 1942, the Nazis began deporting Jews from ghettos under the auspices of the Final Solution. Some were shifted to labour camps, others to death camps.

Citation information
Title: “Jewish resettlement and ghettos”
Authors: Jennifer Llewellyn, Steve Thompson
Publisher: Alpha History
URL: https://alphahistory.com/holocaust/jewish-resettlement-ghettos/
Date published: August 5, 2020
Date accessed: November 26, 2022
Copyright: The content on this page may not be republished without our express permission. For more information on usage, please refer to our Terms of Use.