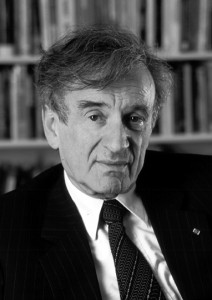 Elie Wiesel (1928-2016) was a Jewish-American author and academic, and a survivor of both the Holocaust and Auschwitz-Birkenau. He wrote prolifically about his experiences and was awarded the 1986 Nobel Peace Prize.

Wiesel was born in Sighet in Transylvania, Romania, a town with a population of around 15,000 Jews. His father was a shopkeeper and the family were well educated and spoke several languages, including Yiddish and Hebrew.

The family was untroubled by the war until 1944 when the Nazis invaded Hungary. The Jewish population of Sighet was detained in two ghettos and thousands, including Elie and his family, were deported to Auschwitz-Birkenau. His mother and sister were killed shortly after arriving at Auschwitz while Elie and his father survived as forced labourers.

Both men were relocated to Buchenwald. Wiesel’s father died from starvation and dysentery in January 1945. When Wiesel was liberated by American troops in April, his appearance was skeletal and he was not far from death.

After the war, Wiesel settled in France, where he reunited with his two surviving sisters. He studied French and became a journalist and foreign correspondent, spending some time in the newly formed Jewish state of Israel.

In the mid-1950s, Wiesel penned a personal account of life in Auschwitz called La Nuit (or Night). It did not sell well initially but the capture and trial of Adolf Eichmann sparked interest in the Holocaust. Night would eventually sell several million copies worldwide and became the first book of a best-selling trilogy.