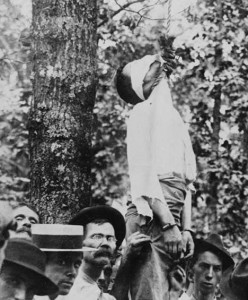 Anti-Semitism also existed outside Europe, though to a lesser extent. Before the 19th century, most Jews outside Europe lived in comparative peace, largely undisturbed by anti-Semitic persecution or violence. Ideas and prejudices cannot be confined to continents, however, so this isolation did not last.

As the 19th century progressed and thousands of Europeans emigrated in search of a better life, anti-Semitic ideas and prejudices were exported to other parts of the world, where they sometimes took root and evolved. By the beginning of the 1900s, anti-Semitism was no longer a distinctly European phenomenon.

In the United States, anti-Semitism reached its peak during the interwar period as Jews again became a convenient scapegoat for a troubled world, full of tension, economic suffering and social unrest.

While this new American anti-Semitism was less widespread and less intense than that found in the Old World, it still caused exclusion, discrimination and suffering for many Jewish Americans.

The United States, in comparison to Europe, experienced relatively little anti-Semitism during the 18th and early 19th centuries.

Prior to the American Revolution (1776-83) there were around 2,000 Jews in America, most living in the major cities like New York, Philadelphia, Baltimore and Charlestown. Jews in colonial America were prohibited from voting – but this was not specifically anti-Semitic as the same prohibitions applied to Catholics, women, slaves, indentured servants and native Americans.

These restrictions were gradually removed after the American Revolution and Jews began to enjoy political and economic equality with other Americans. These new freedoms enticed more Jews to emigrate from Europe.

In 1845, two Jewish Americans were elected to the federal Congress, an event reported with ridicule back in some Europe papers. By 1850, the United States had approximately 50,000 Jewish citizens, some of whom became prominent businessmen in trade, banking and manufacturing.

The Jewish population in America increased during the late 1800s, as Jews fled persecution in Russia, Polish and eastern European and sought safety and opportunities across the Atlantic. Between 1900 and 1924, more than 1.7 million Jewish immigrants arrived in the United States.

Some of this prejudice was driven by xenophobia and economic fears as much as anti-Semitism. The Immigration Restriction League, formed in 1894, was chiefly concerned about American workers being replaced by cheap labour imported from Europe. Some anti-Semitism was driven by envy, as Jewish bankers and businessmen were accused of acquiring disproportionate levels of power and profit.

Anti-Semitism in the South

The more medieval forms of anti-Semitism also took hold in America, imported and circulated by non-Jewish immigrants from the Old World. Among these prejudices were stereotypes of Jews as swindlers, fears of Zionism and Jewish conspiracy, even tales of the notorious blood libel.

This traditional anti-Semitism was particularly acute among extremists in America’s southern states, still embittered by defeat in the Civil War (1861-65). The Knights of the Ku Klux Klan, formed in the late 1860s, became as anti-Semitic as it was hostile to African-Americans and racial integration.

Southern anti-Semitism was at the heart of the 1915 lynching of Leo Frank, a Jewish factory manager from Marietta, Georgia. Frank had been charged with the rape and murder of a 13-year-old girl, despite strong evidence the factory’s African-American janitor may have been responsible.

Frank’s trial was conducted in an environment of hostility and anti-Jewish prejudice. Angry crowds filled the gallery while mobs lingered outside open windows, staring menacingly at the defendant, trial witnesses and jury members.

The trial itself was filled with racist commentary and innuendo. Much was speculated about Frank’s Jewish heritage, while Frank’s own lawyer described the janitor as a “dirty, filthy, black, drunken, lying nigger”.

Despite flimsy evidence presented by the prosecution, Frank was found guilty and sentenced to hang. When the governor of Georgia commuted the sentence to life imprisonment, an angry mob stormed the prison, seized Frank, drove him back to Marietta and lynched him. Some later posed for photographs beside the body.

Nobody involved in the lynching was ever charged or brought to trial; in some parts of Georgia, they were hailed as heroes. The Frank lynching prompted more than 3,000 Jews to flee the state of Georgia.

American anti-Semitism reached its peak in the 1920s and 1930s. The Russian Revolution and the anti-communist Red Scare of 1918-20 was a contributing factor, as many Americans associated Jews with the emergence of communism.

The growing Ku Klux Klan was a significant source of anti-Semitism in America. So was the circulation of The Protocols of Zion and articles published by industrialist Henry Ford. In 1924, the US Congress responded to this anti-Semitic paranoia by limiting immigration from eastern European nations with large Jewish populations.

Opinion polls conducted in the 1930s suggested between 30-40% of Americans held or accepted negative stereotypes or views about Jewish people.

Britain was home to very few Jews between the High Middle Ages to the 18th century. This was due mainly to Edward I’s expulsion of Jews from Britain in 1290.

This began to change in the 1700s after the government agreed to accept thousands of Polish refugees fleeing Russian persecution. Most of these refugees were Jewish and, by 1830, Britain had a small population of around 40,000 Jews.

Like England’s Catholics, Jews faced restrictions that prevented them from voting or entering parliament. They formed lobby groups to campaign for the removal of these restrictions, a reform that was finally accepted in 1858.

Ten years later, Benjamin Disraeli, a Briton of Jewish heritage, was elected prime minister (though he had to convert to Christianity to do so).

A haven for European Jews

These reforms and freedoms, along with the absence of any intense forms of anti-Semitism, made Britain a haven for Jews fleeing persecution in mainland Europe.

In the 25 years after 1880, Britain’s Jewish population more than quadrupled. By the outbreak of World War I, there were more than 250,000 Jewish Britons.

This influx of Jewish immigrants was not without its problems. A great number of Jewish arrivals took up residence in London’s already cramped East End, placing pressure on existing accommodation and facilities and increasing competition for work.

Perhaps the most notable increase in modern anti-Semitism occurred in the Middle East and the Islamic world.

Through the Middle Ages and into the 18th century, large Jewish populations lived in the Ottoman Empire, Iran, Yemen, Syria and North Africa. They lived in these places in comparative peace and under the protection of Muslim rulers.

Jews in these regions were deemed to be dhimmi [‘people of the book’] who shared a religious heritage with Muslims. While they did not enjoy full equality with Muslims, Jews in the Ottoman Empire enjoyed greater freedoms than those in Christian Europe. They were permitted to live, work and trade with non-Jews with little or no restriction. Jews were also permitted to worship in private.

This co-existence deteriorated during the 1800s as anti-Semitism seeped into the Islamic world. Some of it was spread by Christian Arabs, who imported conspiracy theories and tales of ‘Jewish wickedness’. Some was a by-product of political instability and economic deterioration.

As the Ottoman Empire went into decline and then disintegration, many local rulers found it easier to blame Jews for their domestic problems. Not for the first time in history, Jews became a convenient scapegoat for problems they had not caused.

These changing attitudes led to exploitation and then persecution of Jewish populations. In some parts of the Ottoman Empire, Jews were subject to additional taxation, legal and business restrictions and humiliating social customs.

In Iran, Jews were deemed to be ‘unclean’. They were banned from appearing outside at certain times. At royal ceremonies and celebrations, groups of Jews were thrown into tanks of water and mud for public entertainment. Through the 1800s, there were massacres of Jews in Baghdad (Iraq), Meshed (Iran), Damascus (Syria), Marrakesh and Fez (Morocco), Tunis and Djerba (Tunisia) and Tripoli (Libya).

A historian’s view:
“The worst period of American anti-Semitism was sandwiched between the ends of World War I and World War II. Societal changes in the 1920s, the Great Depression of the 1930s and the anxieties during the Second World War intensified and exacerbated attitudes that had already manifested themselves. These hostile feelings coalesced from the 1920s at such an accelerated pace that many Jews thought what had happened in Hitler’s Germany might very well occur in the United States.”
Sander L. Gilman

1. A rapid increase in global migration during the 1800s saw anti-Semitic ideas and prejudices exported to other parts of the world.

2. The United States had no history of intense anti-Semitism, however, it grew there in the late 1800s as Jewish immigration increased.

3. American anti-Semitism was particularly intense in the southern states, evidence by the trial and lynching of Jewish man Leo Frank.

4. Britain, despite its fast-growing population of Jewish immigrants, was comparatively free of intense forms of anti-Semitism,

5. Jews had previously lived in comparative peace in the Middle Ages but the decay of the Ottoman Empire led to increases in anti-Semitic hostility, mistreatment and violence.

Citation information
Title: “Anti-Semitism outside Europe”
Authors: Jennifer Llewellyn, Steve Thompson
Publisher: Alpha History
URL: https://alphahistory.com/holocaust/anti-semitism-outside-europe/
Date published: July 24, 2020
Date accessed: June 29, 2022
Copyright: The content on this page may not be republished without our express permission. For more information on usage, please refer to our Terms of Use.