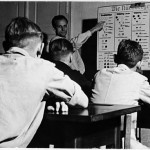 A teacher explains the Nuremberg Laws to students

Adolf Hitler was appointed chancellor of Germany in January 1933. In elections held weeks later in March, the Nazi Party further increased its numbers in the Reichstag, Germany’s legislature. It did not take long for the Nazis to take action against Germany’s Jewish population. On April 1st 1933, just weeks after Hitler’s appointment as chancellor, the Sturmabteilung (SA) initiated a campaign to encourage boycotts of Jewish-owned businesses. Across Germany, small Jewish stores were daubed with Stars of David or painted with slogans like Kauf nicht bei Juden (‘Don’t buy from Jews’). SA troopers lingered menacingly outside larger businesses owned by Jews, including department stores, cinemas or banks. There were several instances of Jews being assaulted or property being destroyed. The boycott was reported as being the work of the SA rather than the Nazi government; nevertheless, the government did little to halt or restrain it.

Days later, on April 7th 1933, the Nazi-controlled Reichstag passed the Gesetz zur Wiederherstellung des Berufsbeamtentums (‘Law for the Restoration of the Professional Civil Service’). It would be the first of dozens of anti-Semitic laws, edicts and decrees introduced by the Nazi regime during the 1930s. The Civil Service law abolished the employment rights of Jewish public servants. It also banned non-Aryan Germans from holding state jobs. In effect, it prevented Jews from working as judges, doctors in state-run hospitals, lawyers in government departments and teachers in state schools. This legislation proved controversial. It invited criticism from German president Paul von Hindenburg, a former World War I general, who was appalled that Jewish veterans of the war would be disadvantaged. At Hindenburg’s insistence, Hitler amended the law to exclude war veterans. He would abolish these amendments after Hindenburg’s death in August 1934.

Between mid-1933 and the early 1940s, the Nazi regime passed dozens of laws and decrees that eroded the rights of Jews in Germany. Some were seemingly insignificant, such as an April 1935 edict banning Jews from flying the German flag; or a February 1942 order prohibiting Jews from owning pets. But others withdrew the voting rights of Jews, their access to education, their capacity to own businesses or to hold particular jobs. In 1934 Jews were banned from sitting university exams; in 1936 they were forbidden from using parks or public swimming pools and from owning electrical equipment, typewriters or bicycles. Jews were also subject to cultural and artistic restrictions, forcing hundreds to leave jobs in the theatre, cinema, cabaret and the visual arts.

But even the extraction of Jews from German economic and cultural life was not enough for some. Hardline anti-Semites in the NSDAP talked of taking tougher action against the Jews, with or without the backing of Hitler and his government. The summer of 1935 saw an escalation in spontaneous violence against Jewish people and property, conducted chiefly by SA troopers. In August 1935 Hitler ordered a stop to these “individual actions” – not to protect Jews but to prevent disruption or damage to the German economy. By the NSDAP’s annual rally in September 1935, Hitler was under considerable pressure from party hierarchs to order a more decisive response to the ‘Jewish problem’. The radicals who instigated anti-Jewish violence wanted the government to legitimise their actions, to provide legal immunity from prosecution or civil action. There were calls for sweeping laws to restrict Jewish economic influence; to prohibit interracial marriage or sexual relations; even to limit or remove the citizenship of German Jews. Some Nazis demanded the government issue clear legal and ethnological guidelines, to provide certainty about who was Jewish and who was not.

“German society’s allegiance to the necessity of written laws was recognised by the Nazis when they came to power, and the recognition that policies had to appear to be law-based persisted through the peacetime years of Nazi rule. In 1938, when the number two Nazi Hermann Goering suggested in the course of a discussion that German travellers could always kick Jewish passengers out of a crowded compartment on a train, the propaganda minister Joseph Goebbels replied: ‘I would not say that. I do not believe in this. There has to be a law.'”
Jonathan Friedman, historian

The NSDAP’s seventh annual rally, dubbed the “Rally of Freedom”, began in Nuremberg on September 10th 1935. During the course of the rally, Hitler summoned key Nazi officials and ordered them to draft anti-Jewish laws for presentation to the Reichstag. Hitler himself spent 48 hours trying to formulate an adequate racial and legal definition for a Jew. He was unable to make up his mind, so left the matter to his officials. On September 15th, Hitler addressed the Reichstag, then temporarily convened in Nuremberg. He announced two new laws to clarify and define racial identity in Germany. His draft legislation would also outline and restrict the relationship between Jews and Aryan Germans:

These two acts became collectively known as the Nuremberg Laws. They were received well at the rally – but they did not satisfy extremists in the NSDAP and SA, who believed Hitler’s laws did not go far enough. Despite their brevity, the two Nuremberg Laws were worded so broadly that they legitimised a wide array of anti-Semitic policies over the coming years. Sometimes this persecution was officially sanctioned and promulgated by the government; at other times it was ‘unofficial’, carried out by agreement rather than by law. Between the mid-1930s and into the first years of World War II, the Nazi regime passed a torrent of laws and regulations that eroded Jewish civil rights. More than 2,000 anti-Semitic decrees were passed at national, state and municipal levels. Some of these measures were seemingly minor, while others affected a significant number of people. The following timeline contains a sampling of these anti-Jewish decrees:

In 1938 the Nazi government also launched a concerted effort to eliminate Jews from German economic life. Between 1933 and 1938, Jewish-owned businesses endured significant pressure, aimed at forcing them to close down or sell to Aryan Germans. Jewish businesses lost customers because of SA-led boycotts; they lost government contracts to non-Jewish competitors, and they found it difficult to secure supplies of wholesale goods or raw materials. In addition, Nazi laws banned Jews from certain occupations and (from 1938) prohibited Jews from working alongside Aryans. This made it impossible for some businesses to retain or find workers. Thousands of Jewish businesses were forced into closure or bankruptcy by this economic apartheid. Of the 100,000 or so Jewish-owned businesses in German in 1933, fewer than one third were still operational in early 1938.

In 1938 the Nazi regime moved to completely extract Jews from German economic life and to ‘Aryanise’ all Jewish property (that is, to transfer it into the hands of Aryan Germans). This campaign was largely led by Hermann Goering, who was overseeing Hitler’s four-year plan to transform and militarise the German economy. In April 1938 Goering decreed that Jews must submit an inventory of all privately owned property with a value exceeding 5,000 Reichsmarks. Then in November, just days after the Kristallnacht pogrom, Goering issued a decree ‘removing Jews from German economic life’. This effectively banned Jews from owning or operating any form of retail business – from a large department store to a small stall at a local market. With one fell swoop, the Nazis killed off most of the 30,000 or so Jewish businesses which had managed to survive the 1930s.

1. The Nuremberg Laws were the Nazi Party’s 1935 attack on the civil rights of Germany’s Jews.
2. Under pressure from party radicals, Hitler formulated and announced the laws in September 1935.
3. One law defined who was ‘pure’ German, Jewish or of mixed blood, and banned inter-racial marriages.
4. The second law withdrew German citizenship for Jews, banning them from voting or public office.
5. These laws unfurled a series of anti-Jewish restrictions and prohibitions between 1935 and 1938.

Do NOT follow this link or you will be banned from the site!