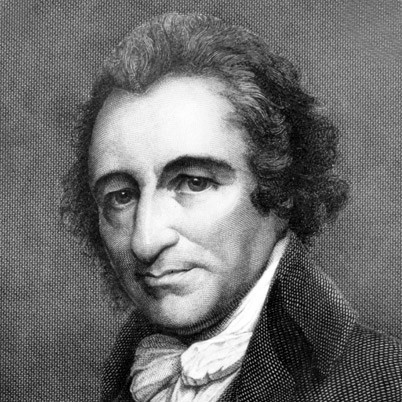 Thomas Paine (1737-1809) was a British-American revolutionary who contributed to events in France during the 1790s.

Paine was British by birth, the son of a Quaker farmer from Norfolk. In 1774 he travelled to America, then on the brink of revolution, and acquired a reputation for writing political pamphlets that were as clearly written as they were radical. Paine’s 1776 republican essay Common Sense was one of the great tracts of the American Revolution and also became well-known in France.

Paine returned to England in the 1780s, where he penned The Rights of Man, angering the establishment and leading to accusations of treason.

In 1792, Paine fled to France, where he was given citizenship and elected to the National Convention, even though he spoke only a minimal amount of French.

While Paine was too radical for the British and many Americans, he was not radical enough for the rising Jacobins of 1793. Towards the end of the year, he was removed from the Convention by a decree banning foreigners, then thrown into prison. He spent almost a year incarcerated, narrowly escaping the guillotine before being released during the Thermidorian reaction of late 1794.

Citation information
Title: “Thomas Paine”
Authors: Jennifer Llewellyn, Steve Thompson
Publisher: Alpha History
URL: https://alphahistory.com/frenchrevolution/thomas-paine/
Date published: May 22, 2017
Date accessed: June 22, 2022
Copyright: The content on this page may not be republished without our express permission. For more information on usage, please refer to our Terms of Use.