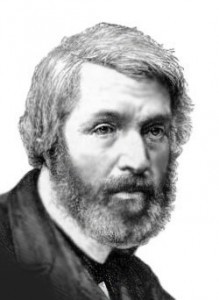 Thomas Carlyle was a Scottish-born essayist and historian of the 19th century.

Carlyle’s seminary historical text, The French Revolution: A History appeared in three volumes in 1837. It was written in a vivid and often stylised way that resembled poetic fiction rather than historical narrative.

In this account, Carlyle understates, overlooks and even criticises ideological aspects of the revolution. Indeed, he seems to view the revolution not as an ideological event but a chaotic mix of individual hopes and fears, compounded by unforeseen situations.

Essentially Whig-liberal in his focus, Carlyle is less interested in conditions, forces and movements than with significant people. He seems to suggest that the actions of heroes and flawed characters drove the revolution, much more than abstracts and wishes.

Carlyle paints Louis XVI and Marie Antoinette as well-meaning and harmless but basically incompetent. He lavishes praise on moderates like Mirabeau and Danton but loathes the “sea-green incorruptible” Robespierre.

Modern historiography tends to paint Carlyle as a liberal-progressive, or even a Utopian. While this may be true of his history of the French Revolution, Carlyle’s later writings became more reactionary – in fact as late as 1849 he was writing essays defending slavery.

“France was long a despotism tempered by epigrams.”

“The actual irrational Versailles government? Alas, that is a government existing there only for its own behoof: without right, except possession; and now also without might. It foresees nothing, sees nothing; has not so much as a purpose, but has only purposes, and the instinct whereby all that exists will struggle to keep existing. Wholly a vortex; in which vain counsels, hallucinations, falsehoods, intrigues, and imbecilities whirl; like withered rubbish in the meeting of winds!”

“Foolish enough! These privileged classes have been used to tax; levying toll, tribute and custom, at all hands, while a penny was left: but to be themselves taxed? Of such privileged persons, meanwhile, do these Notables, all but the merest fraction, consist.”

“Poor ill-advised Marie-Antoinette; with a woman’s vehemence, not with a sovereign’s foresight!”

“Misery which, through long ages, had no spokesman, no helper, will now be its own helper and speak for itself.”

“Do nothing, only keep agitating, debating; and things will destroy themselves.”

“That greenish-coloured individual is an Advocate of Arras; his name is Maximilien Robespierre. With a strict painful mind, an understanding small but clear and ready, he grew in favour with official persons, who could foresee in him an excellent man of business, happily quite free from genius.”

“About eight on the Saturday morning, she [Corday] purchases a large sheath knife in the Palais Royal, then straightway, in the Place des Victoires takes a hackney-coach: It is the residence of the Citoyen Marat! The Citoyen Marat is ill and cannot be seen, which seems to disappoint her much. Her business is with Marat, then? Hapless beautiful Charlotte; hapless squalid Marat!”

“And still the Prisons fill fuller, and still the Guillotine goes faster. On all high roads march flights of Prisoners, wending towards Paris. Not forever; no. All Anarchy, all Evil, Injustice, is, by the nature of it, dragon’s teeth; suicidal, and cannot endure.”