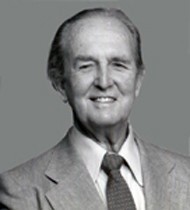 George Rudé (pronounced roo-day) was born and raised in Oslo, the son of a Norwegian father and English mother.

Rudé’s family emigrated to England, where he completed his secondary education before studying languages at Cambridge. During this period Rudé been sympathetic to communism and left-wing political movements.

After graduating from Cambridge he travelled to the Soviet Union and joined the British Communist Party while teaching languages in high schools. Rudé later returned to study and obtained a doctorate in history in 1950; his thesis focused on crowd motives and agitation during the French Revolution.

Rudé entered academia, however, his membership of the Communist Party led to his expulsion from teaching positions in British universities. He moved to Australia and took up professorships at the University of Adelaide and Flinders University, before moving to Canada in 1970. He remained there until his death in 1993.

Historiographically, Rudé was a left-wing social historian who was chiefly interested in crowds, their motivations and actions, and their impact on the development of the revolution. He sought to deconstruct abstract generalisations like “the Paris mob”, delving into primary sources to build a more accurate picture of these groups.

To achieve this, Rudé relied upon often overlooked sources, such as police reports and personal writing, to understand how these crowds were composed and roused to action. Simplistic preconceptions about crowds forming in response to a single event are challenged in Rudé’s work. The leaders of these crowds are also examined and distinguished from the crowds themselves.

“To Burke, the revolutionary crowd was purely destructive and presumed to be composed of the most undesirable social elements: the crowds that invaded the chateau of Versailles in October 1789 are ‘a band of cruel ruffians and assassins, reeking with blood.’ On the other hand [the crowd] has [also] been presented as the embodiment of all the popular and Republican virtues.”

“In respect of social origins, a sharp division is revealed between the mass of demonstrators and insurgents and the political leaders directing, or making political capital out of these operations. [The latter] with few exceptions were drawn from the commercial bourgeoisie, the professions or the liberal aristocracy. This discrepancy in origins between leaders and participants is reflected in a discrepancy in their social and political aims.”

“Perhaps not surprisingly, the most constant motive of popular insurrection during the Revolution, as in the 18th century as a whole, was the compelling need for cheap and plentiful bread and other essentials.”

“The agitation [of political clubs] led to a further radicalisation of the craftsmen and labourers of Paris (by now being called sans-culottes by their more genteel opponents) who began to attend the meetings of the Sections and enrol in the National Guard… By this time they were attending meetings of popular societies, demanding the right to vote, and even reading the radical press. This all served to educate the sans-culottes further in the vocabulary and ideas of the revolutionary bourgeoisie who… were giving the Revolution a decisive turn to the left.”

“Materially, the sans-culottes gained very little from the Revolution: the right to vote and the controls on food prices were withdrawn before the end of 1795. But they most certainly left their mark on events. They had served as the shock troops of revolution in all the great public events… Although never holding more than a handful of seats in the National Assemblies of the Revolution, it was the first time that small craftsmen and tradesmen had ruled a city the size of Paris for a whole critical year. And despite the loss of their more material games, the tradition of mass popular action and direct democracy initiated by the Paris sans-culottes [has] survived.”

“The Jacobins and sans-culottes went down together, the victims of a conspiracy hatched by opponents on both right and left, but from which the right alone gained all the rewards.”