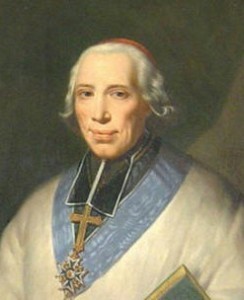 Charles Talleyrand (1754-1838) was a high-ranking clergyman who became a liberal revolutionary, eventually abandoning the church.

Born in Paris, Talleyrand studied both in seminaries and at the prestigious Sorbonne. In 1788, Talleyrand exploited family connections to be appointed Bishop of Autun, despite only being in his early 30s.

The following year, Talleyrand traveled to the Estates-General on behalf of France’s clergy – but instead he supported the ambitions of the Third Estate, crossing the floor to join the National Assembly.

Talleyrand was later instrumental in the formation of a state church, proposing the nationalisation of church lands, contributing to the Civil Constitution of the Clergy and becoming the nation’s most influential juring priest. The Vatican, however, was less than impressed with Talleyrand’s revolutionary zeal and he was defrocked and excommunicated.

In 1792, the discovery of letters in the armoire de fer revealed that Talleyrand had been secretly negotiating with Louis XVI; Talleyrand was abroad, however, so escaped arrest and execution.

He returned to France in late 1795 and re-entered government, serving as foreign minister under Napoleon and, briefly in 1815, as prime minister.

Citation information
Title: “Charles Talleyrand”
Authors: Jennifer Llewellyn, Steve Thompson
Publisher: Alpha History
URL: https://alphahistory.com/frenchrevolution/charles-talleyrand/
Date published: May 28, 2017
Date accessed: January 29, 2023
Copyright: The content on this page may not be republished without our express permission. For more information on usage, please refer to our Terms of Use.