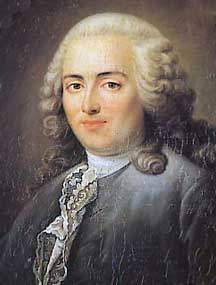 Anne Robert Turgot (1727-1781) was a nobleman, economist and government minister, best known for his attempts at economic reform in the 1770s.

As a young man Turgot attended the Sorbonne with a view towards entering the clergy, however, he abandoned a church career in favour of economics.

In the 1760s, Turgot was put in charge of tax collection in Limoges, which exposed him both to corruption and the inequitable nature of the country’s taxation regime. In 1774, he was appointed Louis XVI‘s finance minister.

In this role, Turgot attempted to rein in government spending, waste and corruption, in order to avoid increasing taxes or committing to additional foreign loans. He also tightened systems of tax collection and proposed that several existing taxes be replaced by a uniform land tax.

By 1776, Turgot’s proposed reforms were becoming even more radical: he suggested abolishing all sinecures and noble privileges while arguing against French involvement in the American Revolution.

Hated by Marie Antoinette and a string of influential nobles, a whispering campaign eventually pushed Turgot into resignation and most of his ideas for reform fell by the wayside.

Citation information
Title: “Anne Robert Turgot”
Authors: John Rae, Steve Thompson
Publisher: Alpha History
URL: https://alphahistory.com/frenchrevolution/anne-robert-turgot/
Date published: May 6, 2017
Date accessed: May 21, 2022
Copyright: The content on this page may not be republished without our express permission. For more information on usage, please refer to our Terms of Use.