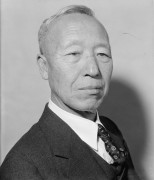 Rhee was born in Hwanghae province, north-western Korea, the third of three sons. His father had royal ancestry but lived as a peasant farmer. At the age of nine Rhee was blinded by smallpox, only to be cured by an American physician. This incident may have shaped Rhee’s pro-Western political views. He later attended an American school and converted to Christianity.

In the late 1890s, Rhee entered the civil service, while also participating in nationalist and republican groups. He was arrested and spent several years in prison until his release in 1904. Rhee then travelled to the United States to lobby for Korean independence. While there he completed degrees at George Washington University and Harvard, then a doctorate at Princeton.

Rhee returned to Korea and worked with the Young Men’s Christian Association (YMCA) before the Japanese occupation forced him into exile. He spent more than two decades abroad, later serving as a minister in Korea’s government-in-exile.

Rhee returned to the Korean peninsula after the Japanese surrender in 1945. Backed by the US government, he became the provisional leader of post-war Korea. In July 1948, Rhee was affirmed as the first president of the South Korean republic, winning 92 per cent of the vote.

Rhee claimed to support a free and democratic South Korea – but there was little about his leadership that was democratic or consultative. Instead, Rhee was an authoritarian ruler who assassinated rivals and crushed political opposition and dissent, regardless of its origin or ideology. From the first year of his rule, Rhee used the South Korean military to engage in brutal repression of suspected communists. The onset of the Korean War in 1950 allowed his regime to intensify this campaign. In 1952 he increased his power by ordering the arrest of opposition politicians and forcing through a constitutional amendment.

The end of the Korean War (July 1953) provided Rhee with an opportunity to rebuild South Korea. Instead, his government achieved no significant reforms and continued to rely on American aid. Rhee’s government and bureaucracy were riddled with corruption, against which he took no action.

In 1956, at the age of 80, Rhee was elected for a second presidential term in elections widely considered to have been rigged. He then amended the constitution to allow him to run again in 1960 and win another suspect election. This time, however, the people took a stand.

Rhee’s autocratic rule came to an end in April 1960 when Korean students initiated a public uprising that forced his resignation. Rhee was spirited out of the country on an American plane and flown to Hawaii. He lived there with his Austrian-born wife until his death in July 1965.