Rudolf Nureyev (1938-1993) was a Russian-born ballet dancer who defected to the West at the height of the Cold War. 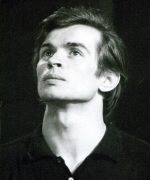 Nureyev was born on a train while his mother was travelling to see his father, a military commissar stationed in Vladivostok. His parents were from peasant stock, lived humbly and supported the communist ideal.

Nureyev developed a love of dance after being taken to the ballet as a young boy. At the age of 11, he received free lessons from a former ballerina who was in her 70s. The teenaged Nureyev worked as a stagehand while continuing to dance and train.

In 1955, he relocated to Leningrad (St Petersburg) and was accepted into the prestigious ballet school there, despite being older than most of his fellow enrollees.

Nureyev graduated in 1958 and joined the Kirov Ballet. His flamboyant and unconventional style, dashing good looks and superb physique stood out in the disciplined conservatism of Soviet ballet. By 1960, Nureyev was one of the most popular dancers in Soviet Russia.

In June 1961 Nureyev caused a sensation by defecting to the West.

A headstrong and erratic character, Nureyev had always struggled with the iron rules and stoicism of the Kirov Ballet. Soviet authorities, aware of this, had limited Nureyev’s opportunities to perform abroad. When the Kirov went on its first foreign tour in the spring of 1961, Nureyev was allowed to go – but only if he was accompanied by a KGB minder.

Nureyev excelled on the stage but caused problems for his handlers, breaking curfews, visiting bars and mingling with foreigners. The KGB twice ordered that Nureyev be returned to Russia but this was ignored by Kirov managers.

As Kirov dancers were waiting at a Paris airport to fly to London, Nureyev was fronted by raincoat-wearing KGB agents, who gave him tickets and orders to return to Moscow. Assisted by French border guards, Nureyev was able to slip their grasp and announce his intention never to return to Soviet Russia.

Western governments hailed Nureyev’s defection as a political victory. The reality was more mundane: Nureyev had little interest in politics but preferred the free and decadent life available in Western cities.

The KGB wanted retribution and launched an operation to recover Nureyev, employing his friends and family to write letters pleading for his return. In the Soviet Union, he was tried in absence and given seven years’ hard labour. Nikita Khrushchev was outraged by Nureyev’s defection and is said to have signed a death warrant if he ever returned to Russia. The KGB considered sabotaging Nureyev’s career by sending agents to break his legs.

None of these plans came to fruition and Nureyev enjoyed two decades of success in the West. He joined the Royal Ballet and formed a notable partnership with English ballerina Margot Fonteyn, appeared in films and on television and, in 1983, was appointed director of the Paris Opera Ballet.