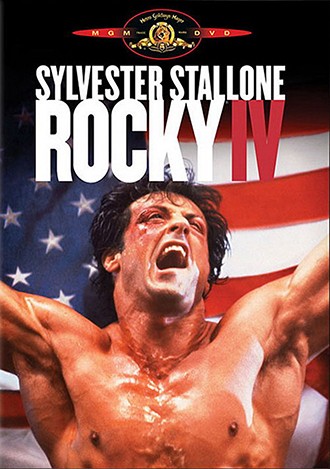 Rocky IV opens with Balboa and his friend and fellow boxer Apollo Creed in retirement – however, Creed signs a lucrative deal to fight a Soviet boxer, Ivan Drago. Balboa agrees to support Creed as his trainer, despite misgivings about his friend’s condition. Meanwhile, the Creed-Drago fight is promoted as a battle of Cold War patriotism and ideologies. While Creed struggles to prepare and reach fitness, Drago appears in superb condition, the product of Soviet discipline and scientific training methods.

The bout between Creed and Drago takes place in Las Vegas. Despite being an exhibition fight with no title at risk, Drago pummels the hapless Creed, who refuses to throw in the towel. Drago finally kills the American with one last powerful punch, showing no concern or remorse.

Wracked by guilt and disgust at Drago’s actions, Balboa agrees to fight the Soviet boxer in Moscow on Christmas Day. Rocky travels to the Soviet Union, where he finds an isolated location and begins training using old-fashioned methods. Drago, in contrast, uses specialist equipment, doctors and performance-enhancing drugs.

The prelude to their fight is marked by Soviet propaganda and triumphalism, while the fight itself takes place before the Soviet secretary-general and members of the Politburo. Will Drago win and confirm their claims of Soviet superiority? Or can Balboa force an upset in hostile surroundings?

Rocky IV is an interesting depiction of Cold War sporting rivalry, however, it has a simplistic narrative and revels in stereotypes. The film depicts the Soviets as cold, emotionless and entirely focused on victory. The most ludicrous character is Drago, who is robotic in his movements and says almost nothing. After killing Apollo Creed the Soviet boxer shows no emotion whatsoever, a response that riles Balboa as much as the act itself. Drago’s support team and his wife, a Russian swimmer named Ludmilla, have more to say – but are equally unsympathetic and focused only on victory.

These stereotypes reflect Western perceptions about Soviet athletes, if not Soviet citizens in general. Rocky IV also attributes Soviet sporting supremacy to fanatical training regimes and widespread steroid use. The film ends with a simple but conciliatory speech from Rocky, who suggests that boxing rings and sporting arenas are the only places where Americans and Soviets should fight.