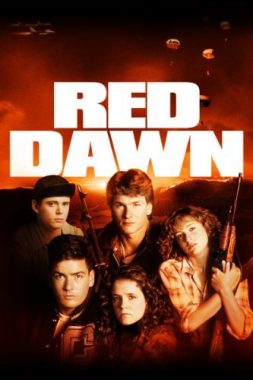 Red Dawn depicts an invasion of the United States by a joint Soviet-Cuban military force. The film provides no political context or clear reasons for this invasion. Some preliminary titles explain that the US has been weakened militarily by the breakup of NATO. This has allowed the Soviet Union to expand its territorial hold over Europe, with Moscow becoming stronger and bolder. A communist revolution in Mexico allows the Soviets to launch a double-pronged invasion of the US, attacking from Alaska in the north and Mexico in the south.

The film’s first signs of invasion are Soviet paratroopers landing in a field near Calumet, Colorado. The town is soon swamped by Cuban and Soviet troops, who take control and move to eliminate any resistance.

The central characters in Red Dawn are a group of teenagers, led by Jed Eckert (Swayze). When the invasion begins, they arm themselves and flee into the nearby mountains, remaining there for several weeks. Later, they sneak back into town to discover that many people, including Jed’s father, have been detained in a concentration camp.

The teenagers form a resistance group called the Wolverines and carry out guerrilla attacks against occupation forces, killing several soldiers. The Soviets and Cubans respond to these attacks by executing captive civilians. The Wolverines rescue a downed US pilot named Tanner, who updates them on the progress of the war. The Soviets have captured the south-central United States, Tanner says, but their advances to the north, east and west have been halted. The Wolverines continue their resistance – but the Soviets become even more determined to eliminate them.

Red Dawn was a financial success but was slammed by most critics, chiefly for its excessive violence. For a time, it held the world record as the most violent film ever made with, on average, more than two acts of violence per minute.

Many also criticised Red Dawn for its unrealistic invasion scenario, its glorification of war and its promotion of gun culture (perhaps a reflection of director John Milius’ own affection for guns). Conservatives, in contrast, praised Red Dawn for its patriotic themes and its depiction of young Americans prepared to fight and die for their country. Liberals were not so impressed, though some hold it up as an example of those prepared to fight against oppressive imperialism.

Red Dawn remains one of the best known Cold War-related films, even though its examination of Cold War political ideas are almost non-existent.