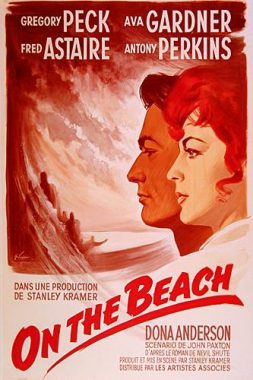 On the Beach is an American motion picture, directed by Stanley Kramer and released in 1959. It stars Gregory Peck as Commander Dwight Towers, Anthony Perkins as Lieutenant Commander Peter Holmes, Ava Gardner as Moira Davidson and Fred Astaire as Julian Osborn.

On the Beach depicts the last days of mankind, in the months after World War III. Radiation released by nuclear weapons has wiped out all life in the Northern Hemisphere. Australia, where the much of the film takes place, is still habitable – however everyone there will soon perish due to a gigantic south-moving radiation cloud. The Australian government prepares its citizens by issuing suicide kits, allowing them to avoid a long and agonising death from radiation sickness. For the most part, however, life goes on as normal.

When radio operators in Australia pick up a Morse code signal emanating from the west coast of the United States, it raises hopes of survivors there. The USS Sawfish, an American submarine docked in Melbourne and now under Australian command, is sent to track down the signal and investigate. The Sawfish arrives in California and a crew member dons a radiation suit and leaves the sub to investigate. The Morse signal turns out to be a false alarm.

Sawfish returns to Melbourne and the film’s characters make plans for their final days. As Australians begin to show signs of radiation sickness, the Sawfish’s crew express their desire to die back home in the United States. Towers agrees to their requests and the submarine leaves Melbourne for home.

On the Beach was based on a book by Australian author Nevil Shute. There are some significant differences between the film and Shute’s novel. The book, for instance, refers to other colonies of survivors in South Africa and South America. The film presents the doomed post-nuclear world in a vaguer, less graphic fashion, relying on its characters rather than its narrative.

The film version was a critical success, though it failed financially. On the Beach was released in 1959 during a calm period of the Cold War: Nikita Khrushchev had just visited President Eisenhower at Camp David and US-Soviet tensions seemed to be easing. It was therefore easy to dismiss the film’s prediction of nuclear war and the subsequent annihilation of mankind. Had it been screened in the early 1950s or 1962, the reception may have been different. On the Beach was not released in the Soviet Union, though a special screening in Moscow was attended by 1,200 Soviet officials.

Citation information
Title: “On the Beach (1959)”
Authors: Jennifer Llewellyn, Steve Thompson
Publisher: Alpha History
URL: https://alphahistory.com/coldwar/on-the-beach-1959/
Date published: September 26, 2018
Date accessed: January 21, 2022
Copyright: The content on this page may not be republished without our express permission. For more information on usage, please refer to our Terms of Use.