Francis Gary Powers (1929-1977) was an American pilot who was captured by the Soviet Union while flying a surveillance mission in 1960. 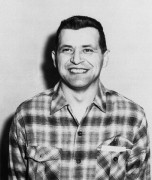 Powers was born in Kentucky, the second of six children in a working-class family. He graduated from Milligan College in 1950 and immediately enlisted in the United States Air Force, where he was trained in photographic equipment.

In 1951, Powers became a cadet pilot, earning his ‘wings’ a year later. He was posted to Georgia, where he demonstrated exceptional skill flying jet aircraft.

Powers left the Air Force in 1956 and was headhunted by the CIA. He was transferred to a secret location and received instruction and training on how to fly the U-2, a high altitude reconnaissance aircraft developed by Lockheed.

In May 1960, Powers took off from a base in Pakistan on his 27th and final U-2 mission. His orders were to overfly and photograph military installations in Soviet territory.

While flying at around 70,000 feet (21,300 metres), Powers’ U-2 was spotted by Soviet air defences, who launched a number of SA-2s, a newly developed Soviet surface-to-air missile. These missiles disabled the plane and Powers was forced to abandon it, parachuting onto a Russian farm. He was promptly arrested by Soviet authorities, who also found the wreckage of the U-2 and its photographic equipment.

Powers’ capture led to an international incident. The US government claimed that Powers’ plane had gone off course while taking weather measurements, however, the Soviets countered this by publicly unveiling the U-2 wreckage and the captured film.

The capture of Powers and his plane, along with the exposure of their mission, proved embarrassing for US president Dwight Eisenhower. He was forced to admit to and justify American surveillance flights.

In the Soviet Union, Powers was charged with espionage, put on trial in Moscow and sentenced to 10 years’ imprisonment. He was released 18 months later, in exchange for a KGB colonel who had been caught spying in the US.

Powers was interrogated rigorously on his return home, American authorities concerned that he had collaborated with or possibly leaked information to the Soviets. He returned to work with the CIA, though not as a pilot.

Powers later worked for Lockheed, test flying U-2s, before becoming a traffic reporter and helicopter pilot for a Los Angeles radio station. He was killed in a helicopter accident in August 1977 and buried at Arlington National Cemetery.