Enver Hoxha (1908-1985) was the communist dictator of Albania for much of the Cold War. Under Hoxha’s leadership, Albania became an eastern European model of Stalinist Russia, marred by brutality and political oppression. 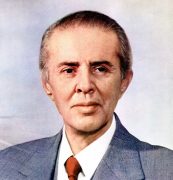 Enver Hoxha was born in southern Albania, the son of a carpet merchant. He was educated at a French school in Korce, then at the University of Montpellier in France. While at university Hoxha became involved in student politics and wrote for communist newsletters. He obtained a diplomatic job in Brussels but was dismissed after continuing to contribute to left-wing newspapers.

Hoxha returned to Albania in 1936. He worked as a teacher of French until Italian fascist forces invaded the country in 1939. From 1940 Hoxha ran a tobacco shop in the Albanian capital Tirana while continuing his communist activities. In November 1941 he became a founding member and leader of the Albanian Communist Party.

During World War II, Hoxha organised a guerrilla force, obtaining help and supplies from British agents. This evolved into a partisan movement called the National Liberation Front (NLF). With Hoxha as its military chief, the NLF led the armed resistance against the Italians and, after mid-1943, the Nazis.

When the Italians withdrew from Albania in 1944, the NLF captured Tirana and established a provisional government, with Hoxha as prime minister. Western countries recognised Hoxha’s government in early 1945, however, this relationship soured after his refusal to hold free elections (the national election held in December 1945 allowed only communist candidates).

In January 1946 the new national assembly voted to reform the country as the People’s Republic of Albania, then set about drafting a Soviet-style constitution. As First Secretary of the Communist Party, Hoxha became Albania’s most powerful leader.

When Hoxha took control of Albania the country was underdeveloped, lacking in infrastructure and reliant on semi-feudal forms of agricultural production. With the assistance of the Soviet Union, Hoxha implemented a series of Five Year Plans designed to industrialise Albania and modernise its infrastructure. Nikita Khrushchev’s denunciation of Joseph Stalin in 1956 triggered a rift with Hoxha, who had modelled his own leadership on that of Stalin.

After this, Hoxha turned to the People’s Republic of China and mimicked the leadership of Mao Zedong. In the mid-1960s, Hoxha initiated his own ‘cultural revolution’, purging professionals from the government and religion from Albanian society. Hoxha’s cult of personality intensified and his government became even more oppressive.

Mao’s death in 1976 forced Hoxha to realign his foreign policy yet again. Meanwhile, without a foreign benefactor, the Albanian economy stagnated and its people endured dire levels of poverty.

Hoxha’s health began to deteriorate in the early 1980s. Despite this Hoxha maintained his repressive rule, purging the government and party of potential threats. He suffered a massive heart attack and died in April 1985. Hoxha was replaced by his prime minister, Ramiz Alia, who allowed gradual economic reform but maintained Hoxha’s strict censorship regime and personality cult. Albania remained the poorest nation in Europe until the 1990s.