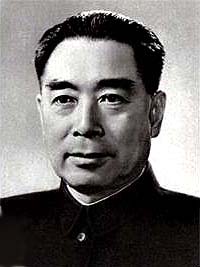 Zhou Enlai (1898-1976, Wade-Giles: Chou En-lai) was a Chinese Communist Party (CCP) figure and important revolutionary figure. He became a significant leader in the People’s Republic, serving as premier for more than 25 years and foreign minister for almost a decade.

Zhou Enlai was born in Jiangsu province and had a disrupted and unhappy childhood. Adopted and orphaned at a young age, he was educated at a missionary school in Tianjin, and in his late teens attended college in Japan.

Zhou returned to China briefly, participating in the May Fourth Movement before returning overseas in 1920 to study in France and Germany. He joined the CCP from abroad and formed a communist youth group amongst expatriate Chinese students. Zhou proved so effective in this role that the CCP and Comintern recalled him to China in 1924.

Zhou became a popular and influential CCP figure, particularly in the party stronghold of Shanghai, where he organised a general strike in 1926. When Jiang Jieshi ordered the dissolution of the First United Front and the massacre of communists in Shanghai, Zhou was captured and was lucky to escape with his life.

After a visit to Russia, Zhou returned to Shanghai, living underground and continuing to strive for urban socialist revolution, however, his attempts to seize control of the city failed and Zhou was forced to move to the safety of Jiangxi in 1931.

Though touted as a rival of Mao Zedong (the party dumped Mao as the Red Army political commissar in 1932, replacing him with Zhou), within three years the two had become friends and firm political allies, an association that would endure into the new society.

Zhou participated in the Long March of 1934, after which he emerged as a party leader alongside Mao. He later served as a military tactician during the Chinese Civil War.

After the communist victory in 1949, Zhou became premier and foreign minister of the People’s Republic of China. He supported Mao Zedong’s policies during the 1950s, including the Great Leap Forward. Some historians hold Zhou partly responsible for the disasters of the late 1950s, as he played an important role in implementing Mao’s economic reforms.

While Mao attempted to reconfigure China’s economy and society, Zhou handled matters of foreign policy, formulating responses to the Korean War, Sino-Soviet affairs and China’s relations with the West. He later negotiated visits to China by US leaders Henry Kissinger and Richard Nixon.

A skilled negotiator and canny political operator, Zhou was an effective counterbalance to the more passionate, less patient Mao. United Nations leader Dag Hammarskjöld once described Zhou as “the most superior brain I have met in the field of foreign politics”.