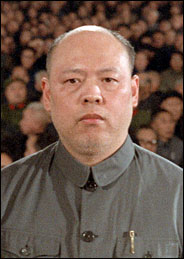 Yao Wenyuan (1931-2005) was an influential communist writer who became one of the Gang of Four.

Yao was born in Zhejiang province but as a teenager moved to Shanghai to follow in the footsteps of his father, a radical writer and Chinese Communist Party (CCP) cadre. One of Yao’s early essays was spotted by Zhang Chunqiao, a future Gang of Four colleague who was then editing the CCP’s Shanghai newspaper.

Yao’s articles either praised Mao Zedong and the party orthodoxy or launched stinging, vitriolic attacks on their critics. He was soon acknowledged and praised by Mao, which further enhanced Yao’s profile.

In November 1965, Yao penned a stinging criticism of a play titled Hai Rui Dismissed from Office which Yao and others interpreted as a coded criticism of Mao Zedong. This essay caused consternation in Beijing and led to Yao being elevated to the Cultural Revolution committee, alongside Zhang and Jiang Qing.

By 1969, Yao was living in Beijing and had been elevated to the CCP Politburo. He spent the next seven years producing and publishing Gang of Four propaganda, until his arrest in October 1976.

Yao spent 18 years in prison and was released in 1996, after which he returned to Shanghai.