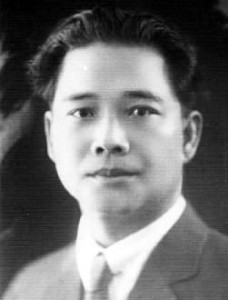 Wang Ching-wei) was a republican revolutionary, head of the Guomindang’s left wing and, later, a puppet ruler of Japanese-occupied China.

Wang was born in Guangdong province and as a teenager was sent to Japan to study law. It was there he became involved in nationalist politics, joining the Tongmenghui in 1905.

He returned to China and in 1910 attempted to assassinate Prince Chun, father of the infant emperor Puyi. Wang was arrested and thrown into prison but was liberated after the collapse of the Qing regime. He fled China during the Warlord Era but returned in the early 1920s to assist Sun Yixian.

Wang became a political rival of Jiang Jieshi, whose militaristic, right-wing republicanism he rejected. In early 1927, while Jiang was leading the final stages of the Northern Expedition, Wang and his supporters set up a national government based in Wuhan. But Wang’s government survived just a few weeks, lasting until Jiang and Guomindang-aligned warlord forces overran Wuhan.

Wang abandoned his personal quest for power and aligned with Jiang in 1932. He was named premier of the Nanjing government, however, his relationship with Jiang remained volatile.

Wang is perhaps best known for collaborating with the Japanese between 1938 and 1945. He signed an unofficial treaty with Japan and in 1940 was installed as a puppet ruler in Japanese-occupied Nanjing.

Wang died in Japan in 1944, condemned as a traitor by both the Chinese Communist Party and the Guomindang.