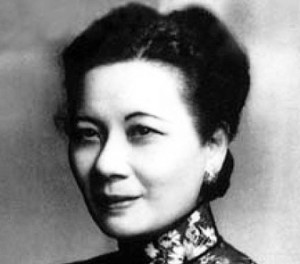 Sòng Meiling (1898-2003, Wade-Giles: Soong May-ling) was the wife of Jiang Jieshi, the sister-in-law of Sun Yixian and an influential political and social leader in her own right.

Sòng was born in Shanghai, the daughter of a wealthy Chinese-Christian businessman. As a child she spent several years in the United States, graduating from high school in Georgia and college in Massachusetts, where she majored in English literature.

She met the much older and still-married Jiang Jieshi in 1920. They married seven years later, after his divorce and conversion to Christianity. Many cynical observers believed Sòng married Jiang to further her political ambitions, while Jiang hoped their union would secure him a foothold among the capitalist elite of Shanghai.

Whatever their motives, Sòng became the ‘first lady’ of Republican China, entertaining foreign dignitaries while working as Jiang’s secretary. From 1934, she was a figurehead and spokesperson for the New Life Movement, which sought to revive conservative Confucian, even quasi-fascist values.

In the early 1940s, Sòng spent time in the United States, acting as Jiang’s de facto ambassador and urging increases in American aid. Propaganda portrayed Jiang and Sòng as a leadership team, though this overstated both her abilities and her contribution.

After Jiang’s death in 1975, Sòng Meiling returned to live in the United States, where she remained until her own death in 2003.