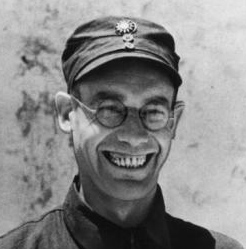 Born in Bavaria, he enlisted in the German army shortly before the end of World War I but saw little combat. After the war, Braun trained as a teacher but soon became involved in left-wing politics, joining the German Communist Party in 1919. The German government imprisoned him for political subversion in the 1920s, however, Braun escaped from custody and fled to Soviet Russia.

Braun received training in Moscow before being dispatched by the Comintern to provide guidance and advice to the embattled CCP. In 1933, Braun arrived in the Jiangxi Soviet, where he adopted a Chinese name, Li De.

In Jiangxi he became a member of the CCP leadership group and had some influence on party policy and tactics; Braun recorded his involvement in a personal memoir, A Comintern Agent in China 1932-1939, though some historians consider this a self-serving record of events.

Braun was one of the few foreigners involved in the Long March. His position was challenged and undermined at the Zunyi conference and in Yan’an, where Mao Zedong and his supporters wrested control of the party from Braun and the other ‘old Bolsheviks’. Braun remained in Yan’an until 1939 before returning to the Soviet Union and, after World War II, to Germany.