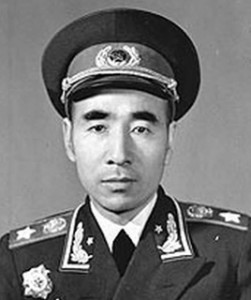 Lin Biao (1907-71, Wade-Giles: Lin Piao) was a Chinese Communist Party (CCP) leader, a prominent People’s Liberation Army (PLA) commander and, until 1971, one of Mao Zedong‘s closest allies. From the late 1950s until his death in a suspicious plane crash in 1971, many considered Lin to be Mao’s anointed successor.

Lin began life as the son of a wealthy merchant from Hubei province. He became interested in communist politics while at school in the early 1920s. In 1925, Lin enrolled at the Huangpu Military Academy. After graduation, he became an officer in the National Revolutionary Army and served in Jiang Jieshi‘s Northern Expedition.

After the anti-communist purge of 1927, Lin fled to Jiangxi and joined the Red Army, serving under Mao Zedong and Zhu De.

During the Jiangxi Soviet and Long March periods, Lin, despite his youth, established himself as one of the CCP’s leading military tacticians and battlefield commanders. He became closely aligned with Mao and praised him both in public and in writing (whether this was sincere or a tactical career move is uncertain).

Lin played an important role in combating the Japanese and sweeping Nationalist forces from China in the 1940s. In 1949, he led columns of the Red Army as they marched victoriously into Beijing.

Lin’s contributions in the first years of the new regime were obscure. He opposed China’s involvement in the Korean War, declining Mao’s request to command the People’s Volunteer Army (PVA) that fought in Korea.

During the 1950s, Lin reportedly suffered a debilitating illness, mental disorder or drug addiction that made him intolerant of water and light.

Lin returned to prominence in 1958 after his appointment to the Politburo Standing Committee. The following year he was appointed as defence minister, following Mao’s denunciation of Peng Dehuai in Lushan.

Lin initiated sweeping reforms of the People’s Liberation Army (PLA), seeking to remove Soviet influence and reduce the growing influence and privilege of the PLA’s professional officer class. He sought to revive the concept of a ‘people’s army’: a volunteer force drawn from the peasantry that was imbued with revolutionary spirit and guided by Maoist ideology.

Lin’s reformed PLA performed creditably in a short but successful 1962 war with India. These achievements impressed Mao and enhanced Lin’s status within the party.

Lin was also an active contributor to the Maoist cult of personality, compiling a collection of writings called Quotations from Chairman Mao Zedong; it became the famous ‘Little Red Book’, one of the enduring icons of communist China.

During the Cultural Revolution, Lin commissioned hundreds of propaganda images that glorified Mao, the PLA and the Red Guards. His prominence now at its peak, Lin appeared in many of these images himself, often at Mao’s side.

With Mao’s power restored and his rivals marginalised, Lin became the Chairman’s virtual second in command. In 1969, the Communist Party constitution was amended to explicitly name Lin as Mao’s successor. Within two years of this, however, Lin Biao and his family were dead. They were aboard a plane that crashed in Mongolia in September 1971, apparently while fleeing China to the Soviet Union.

The reasons for Lin’s flight from China, as well as the plane crash that killed him, been obscured by the communist regime in China. As a result, they are unclear and hotly debated by historians.

Some believe that Lin fled China after a failed attempt to seize control of the government. A more likely explanation is that Lin took flight after Mao, hearing rumours of a military coup, had ordered Lin’s arrest. It is also unclear whether Lin’s plane crash was accidental or the result of Chinese military action. Both Mao Zedong and Zhou Enlai explicitly denied any involvement, Zhou commenting:

“I will say once again that I gave no order to shoot down Lin Biao’s plane. It exploded during its forced landing. It was a self-destruction… Of course I reported to the Chairman when Lin Biao’s plane was on its way abroad. But the Chairman said that rain would fall and widows would remarry; let him go if he wanted to go. If the Chairman could be so tolerant to Lin Biao why should I, Zhou Enlai, stop him?”

Even in death, the communists continued to wreak their revenge on Lin Biao. He became a figure of treachery, hatred and condemnation and was targeted in a hostile propaganda campaign launched by the Gang of Four in 1973 (‘Criticise Lin Biao and Confucius’).