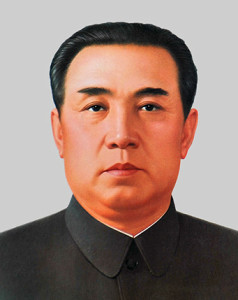 Kim Il-Sung (1912-94) was a Korean-born socialist, military officer and, from the late 1940s, the dictatorial leader of North Korea.

Much of what we know about Kim and his life is obscured or coloured by state propaganda. Born near Pyongyang, reportedly to a Christian family, the infant Kim relocated to Manchuria (northern China) where he received a typical Chinese education. As a teenager, he rejected his family’s religious beliefs and became interested in left-wing politics.

In 1927, the 15-year-old Kim was imprisoned for his political views by China’s Nationalist government. He was released three years later, joined the Chinese Communist Party (1931) and returned to Korea to join anti-Japanese resistance groups there.

According to North Korean accounts, Kim became an important guerrilla leader, commanding a regiment of several hundred men and finding his way onto a Japanese ‘wanted’ list. Kim later crossed into the Soviet Union and enlisted in the Red Army, where he served as a captain during World War II.

After the war, Soviet forces occupied the northern half of the Korean peninsula. As Cold War tensions caused Korea to harden into two separate states, Stalin installed Kim as the puppet leader of North Korea.

Modelling himself on both Stalin and Mao Zedong, Kim developed his own ideology (“Kim Il-Sung Thought”), approved a Soviet-style five-year plan and promised a program of land reform. Kim also expanded his military and threatened war with American-backed South Korea. His army was bolstered by the communist victory in China (October 1949); thousands of Korean soldiers who had fought under Mao returned home to join Kim’s Korean People’s Army (KPA).

Kim initiated an invasion of South Korea in June 1950. Before ordering this attack, he obtained approval from Stalin and a commitment from Mao, who agreed to deploy Chinese ground forces if they were needed. Kim’s assault on the South triggered the Korean War, which soon involved a United Nations coalition led by the United States as well as Chinese forces.

Fighting in the Korean War ended with an armistice signed in July 1953 and almost no territorial change. No formal treaty was signed so North Korea and South Korea are technically still at war.

After the war, North Korea was given Soviet and Chinese aid and advisors to rebuild infrastructure and defences. Kim Il-Sung tightened his control on North Korea, instigating brutal purges and repressions of political dissidents and suspected counter-revolutionaries. The personality cult surrounding Kim was also intensified, state propaganda and education hailing him as the “Great Leader”. Its totalitarian political system and mistreatment of its own people led to North Korea becoming a pariah state, shunned by other nations. China, however, has continued to maintain close ties with North Korea.