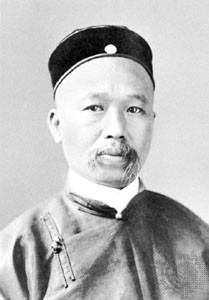 Kang Youwei (1858-1927, Wade-Giles: K’ang You-wei) was a Confucian scholar and Qing official, best known as a contributor to the attempted Hundred Days Reforms of 1898.

Kang was born in Guangdong province, southern China. He completed the rigorous imperial examinations and became a scholar, specialising in politics and philosophy.

Kang was a nationalist who supported the Self-Strengthening movement, hoping it would restore Chinese unity and the strength of the Qing government.

A keen observer of foreign political systems and cultures, Kang’s philosophical writings and popular journalism emphasised the need for political and social reform within China. He constructed a modern interpretation of Confucianism, suggesting it could accommodate important changes rather than acting as a bastion of tradition and conservatism.

In June 1898, Kang was granted an audience with the Guangxu Emperor. At this meeting, he reportedly offered the emperor a number of proposed reforms. There is some debate about the extent to which Kang was directly responsible for the Hundred Days’ reforms that followed, however, conservatives and reactionaries certainly considered them his work.

The Hundred Days’ Reforms were later suppressed by Dowager Empress Cixi and conservatives in the military, forcing Kang to flee to Japan. He was later sentenced to ‘death by a thousand cuts’ in absentia.

While in Japan, Kang continued to write about political change in China, calling for an end to absolute imperial rule and the introduction of a constitutional monarchy.

Kang returned to China in 1913 to oppose the authoritarian presidency and imperial ambitions of Yuan Shikai. His adherence to Confucianism, even in a modified, progressive form, was not popular, so he was ignored by the nationalist movement.