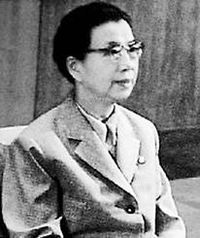 Jiang Qing (1914-91, Wade-Giles: Chiang Ch’ing) was the third and final wife of Mao Zedong. She was also a revolutionary in her own right, rather than a passive consort. By Mao’s death in 1976, Jiang wielded considerable political power, becoming the most influential female leader since the Dowager Empress Cixi.

There was nothing in her chequered youth to predict Jiang’s rise to power. She was born in 1910 into comparative poverty, the only daughter of a prostitute who showed Jiang little affection and, for a time, bound the infant Jiang’s feet in the traditional manner.

By her early 20s, Jiang had been married twice, spent some time at university and launched a career as a Shanghai-based actress, achieving minimal success. She learned of Marxism from one of her lovers and, in 1938, journeyed to Yan’an to study it further. There she utilised her theatrical skills in revolutionary plays and dramas, becoming the leading actress in the CCP stronghold. Her talent and attractive looks caught the eye of Mao.

Mao and Jiang began a relationship, to the chagrin of some party leaders (Mao was already married and they were concerned about the possible impact his affair could have on the party). Mao’s second wife was mentally ill and receiving treatment in Russia.

In 1939, Mao divorced his wife and married Jiang. She accompanied Mao through the wars with Japan and the Guomindang but had no overt public or political role.

After the Chinese Communist Party (CCP) takeover in 1949, Jiang held positions in the Ministry of Culture, advising and directing revolutionary-oriented plays and productions. She emerged as a political mover and shaker during the 1960s, being appointed deputy director of the Cultural Revolution in 1966 and, three years later, becoming a member of the Politburo.

Jiang participated in the public denigration of Mao’s enemies, particularly Liu Shaoqi and Deng Xiaoping. She was also actively involved in motivating and inciting bands of Red Guards.

Throughout this period, Jiang and Mao worked together politically but lived separately. Mao preferred the sexual company of mistresses and young peasant girls rather than his wife.

By the early 1970s, the Cultural Revolution was beginning to lose its energy and the party came under pressure from both the army and Zhou Enlai to restore order. The Sino-Soviet split and the attempted coup by Lin Biao further destabilised the party hierarchy.

The ‘Gang of Four’

In the 1970s, Jiang became associated with the Gang of Four, a faction of notable leaders who enjoyed Mao’s support. They became engaged in a power struggle with a rival group that included Zhou Enlai and the repatriated Deng Xiaoping.

Though herself previously aligned with the now-dead Lin Biao, in 1973 Jiang initiated the “Criticise Lin, Criticise Confucius” campaign, which was ultimately intended as a criticism of Zhou Enlai.

By Mao Zedong’s death in September 1976, the influence of the Gang of Four was in decline. One month later, its members – including Jiang Qing – were denounced, purged from the party and given show trials. Jiang’s defence was that she acted only on the orders of her husband, claiming that she was “Chairman Mao’s dog; whoever he asked me to bite, I bit.”

Jiang was eventually sentenced to death, though this was later commuted to a life sentence. She committed suicide in 1991, aged 77.

A historian’s view:
“There are people who find the world outrageous; Jiang Qing was one of them. Society allocated no reserved seat for her. Few people seemed to be able to speak the language of her deepest emotions. Life itself was neither logical nor fair… It was a major puzzle to her that the world so blatantly failed to conform to her ideal imagination of it. She was far too confident to think that any part of the problem lay within herself. But she was disarmingly aware of the gap, and her life was one long effort to bridge it – through fantasy, in the theatre, by blowing up her own individual will into a universe of its own, in a surge of political action relevant mainly to the imperious demands of her personality.”
Ross Terrill