The Guangxu Emperor (1871-1908, Wade-Giles: Kuang-hsu Emperor) was the ninth and penultimate emperor of the Qing dynasty. He is best known for supporting the ‘Hundred Days of Reform’ in the late 1890s. 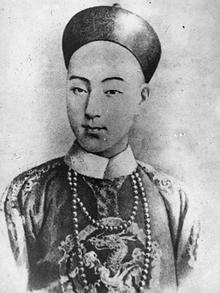 The son of Yihuan, a Manchu prince, the future emperor was born with the name Zaitian. His elevation to the imperial throne was engineered by Cixi, his aunt, in contravention to the usual rules of succession.

In 1875, Zaitain was selected to replace the Tongzhi emperor, who had died childless. Cixi became the four-year-old emperor’s co-regent.

The young emperor was intelligent, well read and curious about foreign systems and political reform – but he was also reserved to the point of shyness and lacked the will to stand against the manipulative Cixi. Even in the emperor’s adulthood and Cixi’s ‘retirement’, she continued to dominate the policies of the imperial court.

At no point was this domination more evident than in 1898, when Cixi short-circuited the emperor’s reformist decrees, placed him under house arrest and drove off his supporters.

The last decade of his reign came to resemble the first: he occupied the Forbidden Palace as a puppet emperor, guided by the regency of his powerful aunt. The Guangxu Emperor died in November 1908, aged 37, one day before Cixi herself. Scientific testing carried out in 2008 suggested the emperor was poisoned with a lethal dose of arsenic.

Citation information
Title: “The Guangxu Emperor”
Authors: Glenn Kucha, Jennifer Llewellyn
Publisher: Alpha History
URL: https://alphahistory.com/chineserevolution/guangxu-emperor/
Date published: January 4, 2016
Date accessed: July 03, 2022
Copyright: The content on this page may not be republished without our express permission. For more information on usage, please refer to our Terms of Use.