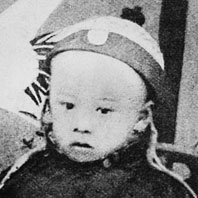 Puyi was a great-grandson of the Daoguang Emperor and a nephew of the childless Guangxu Emperor. He was just two years old when the dying Dowager Empress Cixi anointed him as the future Qing emperor.

Needless to say, the young Puyi had an unusual childhood, separated from his parents, cloistered behind the walls of the Forbidden City and raised by eunuchs and wet nurses. Puyi was too young to perform any official duties, so his father Prince Chun and the Empress Dowager Longyu acted as regent. It was Longyu who approved Puyi’s abdication in February 1912, five days after the emperor’s sixth birthday.

Puyi remained in the Forbidden City for several years, supported by the republican government and later by manipulative warlords. In 1925 he was forced to flee Beijing to Japan.

In 1932, Puyi accepted an offer to rule as emperor of Manchukuo, the Japanese client state established in Manchuria. He remained there until the Japanese defeat in August 1945. Puyi was later captured by the Soviet Red Army. He spent almost 15 years as a prisoner of the Soviet Union and the People’s Republic of China, before being released in 1959. He entered civilian life, married and worked briefly as a journalist.

The final years of Puyi, last of the Qing emperors, were spent as a humble gardener tending Beijing’s botanical gardens.