Tzu-hsi) was a concubine of the Xianfeng Emperor, the mother of the Tongzhi Emperor and the aunt and regent of the Guangxu Emperor. Given the honorific title Dowager Empress, Cixi came to wield political power in the last four decades of the Qing dynasty. 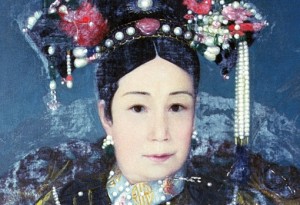 Cixi was born in Beijing, the daughter of a Manchu official. A beautiful and graceful child, at age 15 she was selected as potential consort to the Xianfeng Emperor; three years later she became the emperor’s concubine. In 1856, Cixi delivered the emperor a son, the future Tongzhi Emperor, and she was granted the title Noble Consort.

After the Xianfeng Emperor’s death in 1861 Cixi became a co-regent for her son, the Tongzhi Emperor. Though her titles gave her no political authority, she nevertheless managed to accumulate considerable power and influence – enough to undermine the late Xianfeng emperor’s wife, Dowager Empress Ci’an, and the young emperor’s regency council.

Cixi remained a controlling influence over both the Tongzhi Emperor (died 1875) and his successor, the Guangxu Emperor, for the entirety of their reigns.

By the late 1880s Cixi, then in her 60s, claimed to have retired from political life to reside at her palatial home, the Summer Palace. A string of visitors, acolytes and informants kept her abreast of political matters.

In 1898 Cixi, supported by conservatives in the royal court and the military, moved to thwart the Guangxu Emperor’s Hundred Days reforms. At her order, the emperor was disempowered and held under house arrest and his proposed reforms quashed.

For the next decade, Cixi ruled as a de facto emperor – but at a time of enormous internal and foreign pressure, her isolation, authoritarianism and resistance to reform proved disastrous for the Qing dynasty.

Support for the ‘Boxers’

In 1900, Cixi sided with the Boxer uprising, hoping it would force foreign powers from China and strengthen her own regime. The move failed after the Boxers attacked Beijing but were crushed by troops of the Eight Nations Alliance.

Condemned as a warmonger by the West, Cixi was forced to don a disguise and flee Beijing for several months. She returned to the capital in 1902 but much of her iron will and her staunch conservatism was gone.

In the last years of Cixi’s reign, she agreed to several major reforms, including some of the changes she had thwarted during the Hundred Days of 1898.

The Dowager Empress died in 1908, one day after the Guangxu Emperor. Historians have long speculated whether this was a coincidence; there is certainly some evidence to suggest the emperor was poisoned.

Cixi was despised and demonised abroad. Western newspapers cast her as the ‘Dragon Lady’ and condemned her backward political views, manipulation and extravagant spending. While Cixi was undoubtedly conservative and reactionary, historians are divided on her true political impact.