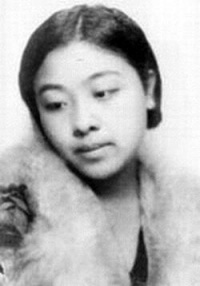 Ding Ling (1904-1986) was a communist propagandist and female writer whose work saw her persecuted during the Cultural Revolution.

Born in Hunan with the birth name Jiang Bingzhi, Ding was educated by her widowed mother. Even at a young age, she demonstrated hostility to traditional values, refusing to submit to an arranged marriage.

As a teenager, Jiang became an avid reader of Western books and political ideas. She also demonstrated a flair for writing, producing radical essays and publishing them in local newspapers.

In 1921, she adopted the pen name Ding Ling and attended a women’s college run by members of the Chinese Communist Party (CCP). Ding’s short stories featured feminist themes, most of them concerned with Chinese women yearning for independence and fulfilment.

In the early 1930s, Ding joined the CCP and her stories began to reflect communist values. In 1933, she was arrested by the Guomindang and kept under house arrest for three years.

Ding then joined the Red Army in northern China, where she was put in charge of a propaganda unit. In the late 1940s, she wrote an optimistic novel about peasants and land reform, which earned her considerable praise from CCP leaders and, in 1951, a Stalin Prize for literature.

Ding’s work in the 1950s became more individualistic and in 1957 she was accused of being a ‘Rightist’ and cultivating Western liberal values. She was expelled from the party and her works were banned.

Ding was later persecuted and imprisoned by the Red Guards during the Cultural Revolution, then sent to the countryside and forced to complete manual labour for more than a decade. She was rehabilitated after the death of Mao Zedong.