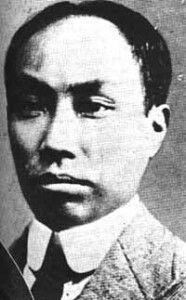 Chen Duxiu (1879-1942) was a prominent writer, academic and founding member of the Chinese Communist Party (CCP).

Duxiu was born to a prosperous mandarin family in Anhui, eastern China. He received a classical Confucian education and passed the upper levels of the imperial examination, before relocating to Japan for further study.

While in Japan, Chen became involved in Chinese reformist groups, though he was not aligned with Sun Yixian‘s Tongmenghui.

Duxiu returned to China and became a professor at Beijing University, though his authorship of several radical publications and his involvement in the May Fourth Movement saw him forced out of academia.

In 1921 Duxiu, along with Li Dazhao and others, founded the CCP in Shanghai and was elected as its first general secretary. Under Duxiu’s guidance, the CCP followed the direction of the Moscow Comintern, even when this conflicted with his own political views.

Chen resigned as general secretary in 1927 and was expelled from the CCP two years later, his leadership unfairly blamed for the failures of the First United Front. He was later arrested and imprisoned by the Nationalist government, returning to teaching after his release in 1937.