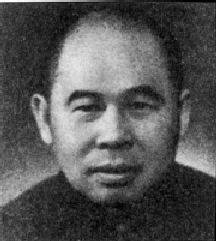 Chen Boda (1904-1989) was a communist writer, propagandist and politician. Until the early 1970s, he was a senior leader of the Chinese Communist Party (CCP).

Born in Fujian province, Chen joined the CCP in 1924 and spent the late 1920s studying in Moscow. He returned to China and in 1937 moved to Yan’an, where he trained party cadres and Red Army personnel.

Within a few weeks, Chen was appointed Mao Zedong‘s political secretary; he also contributed to the Yan’an rectification campaigns in the early 1940s. His loyalty to Mao saw Chen become a member of the Central Committee in 1945 and the Politburo a decade later.

Chen Boda was best known for his continuing role as Mao’s secretary, editor and publisher. In this position, Chen served as the guiding hand that delivered ‘Mao Zedong Thought’ in written form to the masses. Chen was a high profile figure during both the Great Leap Forward and the Cultural Revolution.

His association with both the leadership of the Cultural Revolution and the Lin Biao faction saw Chen removed from the CCP hierarchy in 1971. He was later imprisoned for his connections to Lin Biao but was paroled due to poor health.

A journalist’s view:
“In 1980, he [Chen] went on trial along with the leaders of the Cultural Revolution, who had come to be called the Gang of Four. Then 76 years old, he hobbled into the courtroom on crutches. He said it was he who had outlined the 1966 ‘People’s Daily’ editorial and that others had written it at his behest. He also said he was responsible for a false accusation that leaders in Hebei Province, near Beijing, had advocated collaborating with the Nationalists in Taiwan. That accusation was reported to have led to the deaths of more than 2,000 people at the hands of extremist supporters of Mao.”
Eric Pace, New York Times obituary, 1989