This page contains quotations about the My Lai massacre, carried out by American soldiers of ‘Charlie’ Company in 1968. These quotations have been researched and curated by Alpha History authors. If you would like to suggest a quotation for inclusion here, please contact us. 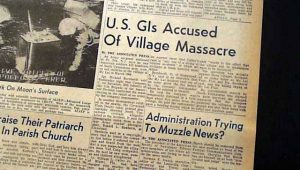 “It was terrible. They were slaughtering villagers like so many sheep.”

“That day it was just a massacre. Just plain right out, wiping out people.”

“I would say that most people in our company didn’t consider the Vietnamese human… A guy would just grab one of the girls there and in one or two incidents they shot the girls when they got done.”

“The most disturbing thing I saw was one boy and this is what haunts me … A boy with his arms shot off, shot up and hanging on and he just had this bewildered look on his face like what did I do, what’s wrong… he couldn’t comprehend.”

“I feel that they were able to carry out the assigned task, the orders that meant killing small kids, killing women because they were trained that way, they was trained that when you get into combat it’s either you or the enemy…”

“The only crime that I have committed is in judgement of my values. Apparently, I valued my troops’ lives more than I did that of the enemy.”

“It is why I’m old before my time. I remember it all the time. I’m all alone and life is hard. Thinking about it has made me old … I won’t forgive as long as I live — think of the babies being killed, then ask me why I hate them.”