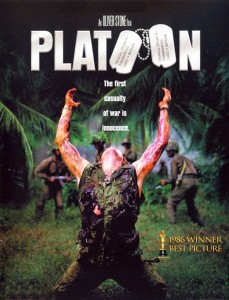 Platoon opens with Taylor’s arrival for a tour of duty in Vietnam. Unlike most other American GIs, Taylor volunteered to enlist after dropping out of college. He arrives with an idealistic view of the war and the role his country is playing in Vietnam.

Taylor’s idealism is quickly shattered by the cynicism of his fellow soldiers and his first experiences of combat. During an attack by North Vietnamese troops, a member of the platoon falls asleep on his watch and Taylor is accused of contributing to the death of several men. Afterwards, he is scolded and threatened by the ‘gung-ho’ Sergeant Barnes.

As the film progresses, Taylor falls in with a group of soldiers led by the more easy-going and philosophical Sergeant Elias. While off-duty, this group engages in drug use, discussion and escapism from the war.

While patrolling rural areas, several men from Taylor’s unit are killed by enemy ambushes and booby traps. The lack of direct engagement with the Viet Cong causes frustration and fuels a desire for retaliation.

Under Barnes’ command, the platoon raids a Vietnamese village and brutalises civilians. A woman is murdered and another subjected to an attempted gang rape, while Barnes threatens to execute a young girl to extract information from her father. This attack is interrupted by Elias and a lieutenant, who orders the village to be destroyed. Barnes later shoots Elias to avoid an investigation and court-martial for the raid on the village.

Many critics consider Platoon the best cinematic depiction of the Vietnam War. It won several major awards, including Oscars for best picture and best director. Director Oliver Stone was able to draw on his own experiences in Vietnam, first as an English teacher (1965-66) and later as a combat soldier (1967-68).

Platoon capably depicts the challenges, moral ambiguities and divisions encountered by those who served in Vietnam. The plot is chaotic and spontaneous, much like the fighting in Vietnam. The enemy is always present but rarely seen. Taylor’s own idealism about the Vietnam conflict mirrors the optimism of his country – bright at first but quickly eroded.

Taylor arrives in Vietnam believing he can change it for the better, only to find a situation much more complex and unresolvable than anticipated. The bitter and scarred Sergeant Barnes and the sympathetic but drug-addled Sergeant Elias represent different attitudes.

Platoon is rated ‘R’ and may not be suitable for younger audiences.

Citation information
Title: “Platoon (1986)”
Authors: Jennifer Llewellyn, Jim Southey, Steve Thompson
Publisher: Alpha History
URL: https://alphahistory.com/vietnamwar/platoon-1986/
Date published: March 17, 2018
Date accessed: May 15, 2021
Copyright: The content on this page may not be republished without our express permission. For more information on usage, please refer to our Terms of Use.