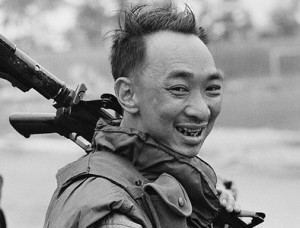 Nguyen Ngoc Loan (1930-1998) was the police chief of Saigon at the time of the Tet Offensive. He is best remembered as the executioner in a famous news photograph from 1968.

Nguyen Ngoc Loan was born in December 1930 to a middle-class family in Hue. He attended school and was friends with Nguyen Cao Ky, the future air force chief and prime minister of South Vietnam.

Loan joined the Vietnamese National Army and like Ky was sent to Morocco for pilot training. He returned as a pilot in the South Vietnamese air force, flying missions against Viet Cong positions. With Ky’s backing, Loan was appointed the head of the civilian and military police and a director of South Vietnam’s Central Intelligence Organisation.

Loan was a strident nationalist who believed Vietnam should be ruled by the Vietnamese. He fought stridently against the communist insurgency – but Loan also opposed increasing American influence in South Vietnam, arguing that American soldiers and officials were subject to the same laws and obligations as the locals. These views made Loan unpopular with the Americans, who pressured Saigon to remove him from positions of significance.

Loan is best known as the executioner of Nguyen Van Lem, a Viet Cong militia leader, during the Tet Offensive. Loan’s brigade had captured Lem near a mass grave and Loan decided to summarily execute Lem in the street. The incident was captured by American television cameras and an Associated Press photographer. The publication of these images caused worldwide controversy and indignation.

Loan himself was seriously injured by machine gun fire soon after, resulting in the loss of a leg. He later emigrated to the United States, where he ran a pizza parlour on the outskirts of Washington D.C. He died from cancer in July 1988.