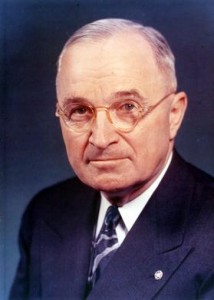 Truman, the son of a cattle farmer, was raised in rural Missouri. He received a rudimentary education, starting school at age eight and graduating from high school in 1901; he is the last US president not to have held a college degree.

Truman worked on railways and in clerical jobs, before joining the army in 1917. He served as an artillery captain in World War I, seeing extensive combat on the Western Front. Truman settled in Kansas after the war, before returning to his native Missouri. During the 1920s, Truman ran a clothing store (which went bankrupt), sold automobile club memberships and held a series of public offices.

In 1934, Truman was elected to the US Senate. Ten years later, Truman was selected as president Franklin Roosevelt’s running mate. In November 1944 Truman, who by his own admission had an unremarkable political record, was elected vice president of the United States.

Truman had been vice-president for less than three months when Roosevelt died in April 1945. Despite his inexperience in foreign policy, Truman soon proved himself to be a strong-willed and astute operator. He oversaw the final months of World War II and gave orders for the detonation of two atomic bombs over Japan.

Truman despised communism and distrusted communist leaders, particularly Soviet dictator Joseph Stalin. He was the first US president to accept the Domino Theory and take steps to contain communist expansion.

In 1947, Truman promised American help for other nations resisting communist aggression and infiltration. This position, later called the Truman Doctrine, would underpin US foreign policy during the Cold War.

With regard to Vietnam, Truman’s government refused to recognise Ho Chi Minh’s 1945 declaration of Vietnamese independence. Instead, in February 1950 Truman recognised a self-governing Vietnam still under French sovereignty. In May 1950, he committed $US10 million in military aid and established the Defence Attaché Office in Saigon, with the purpose of supporting anti-communist forces in Vietnam. More US military assistance and advisors were sent to Vietnam in 1951-52.

Truman’s aid to Vietnam was modest when compared to that of subsequent presidents, however, it established an American commitment to the region that would shape future policy. Truman left office in January 1953 and died in 1972, aged 88.