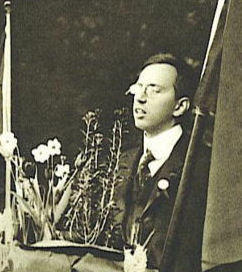 Zeth Höglund (1884-1956) was a Swedish writer, politician, activist, labour leader and strident critic of militarism and World War I.

Höglund was born and raised in Gothenburg, the son of a storekeeper. As a teenager, he became fascinated with left-wing political philosophy, an interest he continued during his humanities studies at Gothenburg University.

In 1903, Höglund moved to Paris, then considered the heart of European socialism, before returning to Sweden to lead the youth wing of the Social Democratic Party.

Höglund became a critic of militarism, co-authoring The Fortress Poorhouse (1913) which likened Sweden to a heavily fortified castle where those inside were destitute.

The following year, Höglund won a seat in the Swedish legislature, where he delivered agitated speeches against war, militarism and the ruling classes.

Sweden maintained a fragile neutrality during World War I but this did not silence Höglund, who continued to speak against the war and organise anti-war rallies.

In 1916, Höglund wrote Peace at any price, an essay urging popular revolution if the government declared war. Though Sweden was not itself at war, Höglund was arrested for sedition and given a year in prison.

When released from prison in May 1917 Höglund addressed thousands of his supporters in Stockholm. He later aligned with Lenin and the Bolsheviks and spent some time observing the Russian Revolution.

Title: “Zeth Hoglund (Sweden)”
Authors: Jennifer Llewellyn, Steve Thompson
Publisher: Alpha History
URL: https://alphahistory.com/worldwar1/zeth-hoglund-sweden/
Date published: July 24, 2017
Date accessed: July 07, 2022
Copyright: The content on this page may not be republished without our express permission. For more information on usage, please refer to our Terms of Use.