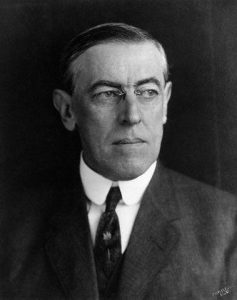 Woodrow Wilson (1856-1924) was the 28th president of the United States, including the duration of World War I. He oversaw America’s entry into the war and played a significant role in post-war peace negotiations.

Wilson was born in Virginia, the son of a Presbyterian minister, and as a child experienced the conflict of the American Civil War.

He studied at Princeton, the University of Virginia and Johns Hopkins, qualifying as a lawyer and receiving a doctorate in history and politics. Wilson then entered academia, eventually becoming president of Princeton in 1902.

In 1910, Wilson was elected governor of New Jersey on an anti-corruption ticket, then two years later ran for the US presidency, winning comprehensively.

Wilson presented as a statesman and an isolationist opposed to war – but he was also prepared to use military force, such as his decision to land American troops in Mexico in April 1914.

When war broke out in Europe in August, Wilson declared neutrality and pledged to keep America out of the conflict. He rebuffed calls to expand the US military and took a measured approach to attacks on American shipping, applying diplomatic pressure on Germany to abandon its policy of unrestricted naval warfare.

The progress of the war, along with several broken promises and the treacherous Zimmerman telegram of early 1917, convinced Wilson that American intervention was required. Reluctantly, he sought a congressional declaration of war in April 1917, declaring that “the world must be made safe for democracy”.

Wilson also set about drafting a plan for post-war reconciliation and conflict resolution, to avoid future catastrophic wars. Many of his famous Fourteen Points were later adopted at the Paris peace talks in 1919.

While Wilson’s foreign policy was successful abroad, it was not welcomed in his own country. He failed to convince Congress to ratify the Treaty of Versailles or accept membership of the League of Nations, decisions that undermined their effectiveness in Europe.

Wilson suffered a significant stroke in October 1919 that left him paralysed, partially blind and able to do little work. Despite this incapacity, he remained president for another 15 months, shielded by his wife, his advisors and cabinet.

Title: “Woodrow Wilson (US)”
Authors: Jennifer Llewellyn, Steve Thompson
Publisher: Alpha History
URL: https://alphahistory.com/worldwar1/woodrow-wilson-us/
Date published: July 14, 2017
Date accessed: July 06, 2022
Copyright: The content on this page may not be republished without our express permission. For more information on usage, please refer to our Terms of Use.