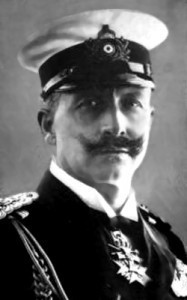 Wilhelm II (1859-1941) was the Kaiser of Germany, the nominal national leader during the war and the individual many consider most responsible for the outbreak of World War I.

Wilhelm was born in Berlin, the son of a future German king and his English wife. As a boy, he received an authoritarian upbringing and education, filled with high expectations, little encouragement and cruel punishments. His contemporaries describe Wilhelm as informed, intelligent and well-travelled but also moody, short-tempered and insecure.

When he came to the throne in his 30th year, the new Kaiser responded by ousting the respected Count von Bismarck from the chancellorship. This heralded a new era of foreign policy dubbed Weltpolitik, aimed at increasing Germany’s trade, colonial possessions and global power.

The new Kaiser was particularly driven by his love-hate relationship with Britain. He wanted to expand Germany’s navy and imperial possessions to rival those of the British.

Wilhelm’s intemperate remarks and undiplomatic behaviour instigated several intentional incidents in the years prior to 1914, such as an inflammatory speech given in French-aligned Morocco in 1905. The Kaiser’s support for the Austro-Hungarian regime in 1914, as well as his hesitation and indecision, contributed to the July crisis and the outbreak of war.

Wilhelm’s leadership during the war was ineffectual and superficial. The Kaiser exerted no real influence on military matters; in most cases, he simply acceded to the wishes of his generals.

By late 1917, Germany was a de facto military dictatorship under Paul von Hindenburg and Erich Ludendorff, while the Kaiser retreated to the role of a figurehead monarch.

In November 1918, with his nation on the brink of defeat and his authority in tatters, the Kaiser came under intense pressure to abdicate the throne. Even this decision had to be made for him by others.

After abdication was forced on him by others, Wilhelm fled to the sanctuary of neutral Holland. He was sheltered for the rest of his life by the Dutch royal family, despite numerous calls that he be extradited and put on trial for his role in initiating the Great War.

Title: “Wilhelm II (Germany)”
Authors: Jennifer Llewellyn, Steve Thompson
Publisher: Alpha History
URL: https://alphahistory.com/worldwar1/wilhelm-ii-germany/
Date published: July 9, 2017
Date accessed: July 03, 2022
Copyright: The content on this page may not be republished without our express permission. For more information on usage, please refer to our Terms of Use.