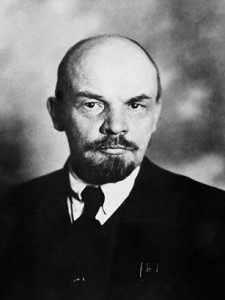 Vladimir Lenin (1870-1924) was a Russian lawyer, philosopher, revolutionary and political leader, famous for opposing the war as an instrument of imperialism.

Born in Simbirsk, the son of a school inspector, Lenin’s political views were undoubtedly shaped by the execution of his older brother, who was accused of plotting to assassinate the Russian tsar.

Lenin became a follower of Marxism, a prolific writer and the most radical of Russia’s socialists. In his essays, Lenin predicted a financially-driven European war, long before it began. In Lenin’s view, imperialism and imperialist wars were the logical end products of capitalism, as industrialised capitalist societies struggled for resources and economic control.

From the outset of the Great War, Lenin and his followers, dubbed the Bolsheviks, maintained a strong anti-war position. They called for war against the upper classes instead of a war between the working masses.

Lenin’s strong and consistent anti-war position saw his grow rapidly in 1916-17. Lenin and the Bolsheviks seized control of Russia in October 1917, overthrowing the tsar and promising to build a socialist state. Russia would remain under Soviet control for the next seven decades.

Title: “Vladimir Lenin (Russia)”
Authors: Jennifer Llewellyn, Steve Thompson
Publisher: Alpha History
URL: https://alphahistory.com/worldwar1/vladimir-lenin-russia/
Date published: July 27, 2017
Date accessed: June 26, 2022
Copyright: The content on this page may not be republished without our express permission. For more information on usage, please refer to our Terms of Use.