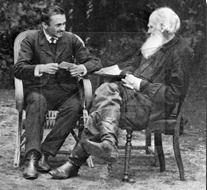 Valentin Bulgakov (1886-1966) was an associate and biographer of the famous Russian writer Leo Tolstoy. He was arrested for drafting an anti-war petition.

Born in Penza, the young Bulgakov was an excellent student who showed a strong interest in literature and promise as a writer. He moved to Moscow for study but later quit to become Tolstoy’s secretary.

After Tolstoy’s death in 1910, Bulgakov oversaw the old man’s legacy, publishing Tolstoy’s final works as well as his own articles and a popular biography. Because Tolstoy had a significant following, Bulgakov became a significant figure in Russian literature and political thought.

When war erupted in 1914, Bulgakov condemned it as “the common enemy of us all”. Those who supported the war, he wrote, were “intoxicated” and overtaken by “the beast within us”.

Bulgakov attempted to assemble an anti-war petition signed by prominent Tolstoyists but was tracked and arrested by the Okhrana, the Russian secret police. He was detained for more than a year but was later acquitted.

Bulgakov later worked as a museum curator and sat on a committee organising food relief during the Soviet famine of 1921.

Title: “Valentin Bulgakov (Russia)”
Authors: Jennifer Llewellyn, Steve Thompson
Publisher: Alpha History
URL: https://alphahistory.com/worldwar1/valentin-bulgakov-russia/
Date published: July 22, 2017
Date accessed: July 06, 2022
Copyright: The content on this page may not be republished without our express permission. For more information on usage, please refer to our Terms of Use.