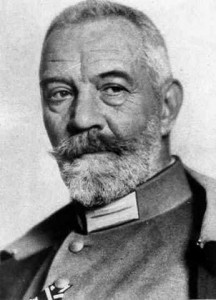 Theobald von Bethmann-Hollweg (1856-1921) was a civilian politician in Germany and its chancellor (prime minister) for much of World War I.

The son of a wealthy landowner, Bethmann qualified as a lawyer and joined the Prussian public service. He served as Prussia’s minister of the interior, before shifting to federal politics and becoming chancellor in 1909.

Bethmann was an intelligent but bland and uninspiring figure, more an administrator than a politician or a statesman. He did not fully share the militaristic or imperialist dreams of the Kaiser and his generals, nor was he an enthusiastic supporter of the arms and naval build-up of the early 1900s.

Bethmann wanted peaceful relations with Britain and Russia but in the end, his voice was lost amid the calls for war in 1914.

After August 1914, Bethmann threw himself into managing the home front. He also drafted the Septemberprogramm, a list of expansionist goals Germany hoped to fulfil after securing victory in the war.

By 1917, the war had taken its toll on Germany and on Bethmann’s reputation and influence. With Germany effectively governed by the ‘Silent Dictatorship’ of Hindenburg and Ludendorff, Bethmann was reduced to a figurehead.

When the Reichstag (German parliament) pushed through a resolution calling for peace negotiations in July 1917, Bethmann had no alternative but to resign the chancellorship.

Title: “Theobald Bethmann-Hollweg (Germany)”
Authors: Jennifer Llewellyn, Steve Thompson
Publisher: Alpha History
URL: https://alphahistory.com/worldwar1/theobald-bethmann-hollweg-germany/
Date published: July 30, 2017
Date accessed: July 07, 2022
Copyright: The content on this page may not be republished without our express permission. For more information on usage, please refer to our Terms of Use.