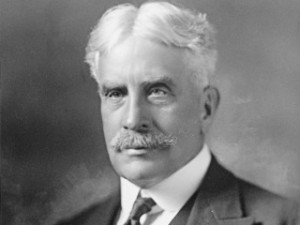 Born into a Nova Scotia farming family, Borden started his adult life as a teacher before becoming a successful lawyer in Halifax. He entered the Canadian parliament in 1896, by which time Borden’s legal practice and business interests had made him independently wealthy.

Borden became the leader of the Conservative Party in 1901. Ten years later, he was elected as Canada’s eighth prime minister since confederation.

Borden threw his weight behind the war effort in 1914, reorganising the government, passing the War Measures Act and increasing the military. Borden promised that Canada would send 500,000 men to Europe by the end of 1916 – but the prolonged duration and heavy losses of the war saw enlistments decline.

Under pressure from the Allies and concerned at the lack of volunteers from French-speaking Quebec, Borden and his government passed the Military Service Act (1917), authorising the prime minister to impose conscription if deemed necessary.

This controversial policy triggered riots in Quebec. As a consequence, conscription was never fully implemented in Canada.

Borden also ensured that Canadian regiments fighting in Europe retained a degree of autonomy, rather than being absorbed into the British military.

Title: “Robert Borden (Canada)”
Authors: Jennifer Llewellyn, Steve Thompson
Publisher: Alpha History
URL: https://alphahistory.com/worldwar1/robert-borden-canada/
Date published: July 10, 2017
Date accessed: July 06, 2022
Copyright: The content on this page may not be republished without our express permission. For more information on usage, please refer to our Terms of Use.