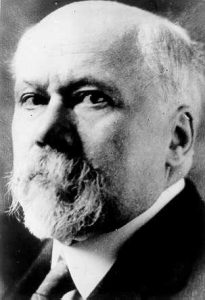 Raymond Poincare (1860-1934) was a French politician who served for eight years as the nation’s president, holding office for the duration of World War I.

Born into an affluent middle class family, the young Poincare lived through the Franco-Prussian War and the occupation of Lorraine, an event that coloured his attitude to Germans and German militarism.

Poincare went on to study and practise law before entering politics in 1886.  By his early 30s, he was already France’s minister for finance and a skilled public orator.

Poincare became prime minister in January 1912 and worked to strengthen France’s alliances with both Britain and Russia. The following year, Poincare was elected president of France.

Despite the presidency having been largely symbolic, Poincare used it to continue his foreign policy agenda and advance war preparations. Universal military service was increased from two years to three, while an income tax was introduced to fund arms purchases.

During World War I, Poincare chaired the Council of Ministers and continued to influence both domestic policy and military strategy. He also made several publicised visits to the front.

As the war took its toll on France, Poincare’s popularity also waned. In late 1917, he was forced to appoint Georges Clemenceau, a man who had often attacked Poincare in his newspapers, as prime minister.

Clemenceau came to dominate both the war effort and the peace process, while Poincare took a back seat. He remained in politics, however, and returned to the prime ministership twice during the 1920s.

Title: “Raymond Poincare (France)”
Authors: Jennifer Llewellyn, Steve Thompson
Publisher: Alpha History
URL: https://alphahistory.com/worldwar1/raymond-poincare-france/
Date published: July 14, 2017
Date accessed: July 07, 2022
Copyright: The content on this page may not be republished without our express permission. For more information on usage, please refer to our Terms of Use.