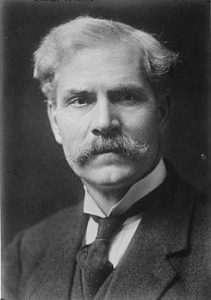 Ramsay MacDonald (1866-1937) was a British socialist, politician and prime minister. He became one of the strongest critics of World War I within the British government.

The illegitimate son of a Scottish farmer and a servant, MacDonald attended school until the age of 15, then became a trainee teacher. Four years later he left for London, where he attended night school and took an interest in politics, joining the Fabian Society.

MacDonald joined the socialist Independent Labour Party (ILP) in 1904. The ILP later was absorbed by the Labour Party but MacDonald remained a member of both.

McDonald was elected to parliament in 1906 and became the leader of the Labour Party in 1911. Under his leadership, the party had a firm anti-war position. MacDonald himself was strongly opposed to war, having visited South Africa and seeing first hand the consequences of the Boer War.

The outbreak of war in August 1914, however, prompted many Labour Party MPs to back the government and the war effort. MacDonald held firm and refused to support war appropriations, resigning the party leadership on August 5th. This made him a target for the patriotic press, which condemned MacDonald as a traitor, engaged in scurrilous personal attacks and called for him to be expelled from parliament. He remained an MP for the duration of the war, even making a visit to Allied troops on the Western Front. MacDonald later returned to the party leadership and served two terms as Britain’s first Labour prime minister.

Title: “Ramsay MacDonald”
Authors: Jennifer Llewellyn, Steve Thompson
Publisher: Alpha History
URL: https://alphahistory.com/worldwar1/ramsay-macdonald/
Date published: July 29, 2017
Date accessed: June 29, 2022
Copyright: The content on this page may not be republished without our express permission. For more information on usage, please refer to our Terms of Use.