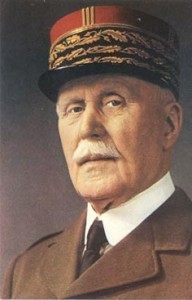 Marshal Philippe Petain (1856-1951) was a French military officer and one of France’s most important commanders during World War I.

The son of a farmer, the teenaged Petain opted for a military career, joining the French army as an officer cadet. His early service was unremarkable; it took him almost 15 years to reach the rank of captain.

By the outbreak of war in 1914, Petain was already nearing his 60s and was considering retirement, however, he was made a general and given important command positions on the Western Front.

Petain was more cautious and defensive than some other Allied commanders. He did not believe that heavy artillery and machine-guns could be overcome by massed infantry charges. Artillery, he argued, could only be countered with artillery.

In 1916, Petain was given command of French forces at Verdun. For a year his men held off the German offensive, though both sides suffered enormous casualties.

The following year Petain was appointed the commander-in-chief of the entire French army, though by 1918 he was technically outranked by Foch, who exercised command of all Allied armies.

Petain emerged from the war with an enhanced reputation: he was one of the few Allied generals who had achieved more successes than failures but without the record of needless slaughter so common on the Western Front.

Petain was later discredited by his four-year presidency of the Nazi-aligned Vichy French republic, for which he spent the last years of his life in prison.

Title: “Philippe Petain (France)”
Authors: Jennifer Llewellyn, Steve Thompson
Publisher: Alpha History
URL: https://alphahistory.com/worldwar1/philippe-petain-france/
Date published: July 21, 2017
Date accessed: July 07, 2022
Copyright: The content on this page may not be republished without our express permission. For more information on usage, please refer to our Terms of Use.