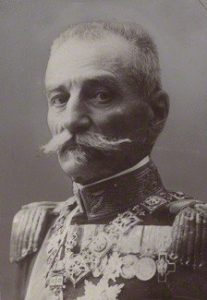 Born in Belgrade, Peter was the son of Alexander Karageorge, a Serbian prince who spent much of his life struggling for autonomy from the Ottomans.

Alexander was forced to abdicate in 1858 and Peter, then aged 10, fled the region. He spent the next 45 years in exile, much of it in France, where Peter trained as a cavalry officer and fought as a volunteer in the Franco-Prussian War. He also returned to the Balkans and participated in a Bosnian Serb uprising against Ottoman rule.

In 1903, Peter became king of Serbia, selected to replace the assassinated Alexander I. A political liberal, Peter transformed the Serbian state into a constitutional monarchy, earning him praise both at home and abroad.

Serbia’s victories in the Balkan Wars further enhanced Peter’s popularity and he became a figurehead for Serbian nationalists.

In mid-1914, the 70-year-old king, who was by now in poor health, surrendered most of his royal powers to his son, though he remained the titular king of Serbia.

Peter’s contributions to the war effort were restricted to morale-boosting battlefield visits, though he did lead a military exodus from Serbia in late 1915.

He again spent a long period in exile before returning to Serbia in 1919 and dying two years later.

Title: “Peter I (Serbia)”
Authors: Jennifer Llewellyn, Steve Thompson
Publisher: Alpha History
URL: https://alphahistory.com/worldwar1/peter-i-serbia/
Date published: July 9, 2017
Date accessed: July 07, 2022
Copyright: The content on this page may not be republished without our express permission. For more information on usage, please refer to our Terms of Use.