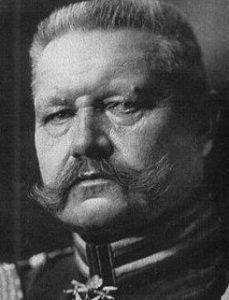 Field Marshal Paul von Hindenburg (1847-1934) was a German army officer and without doubt that country’s most significant military commander during World War I.

Hindenburg was born into one of Prussia’s most distinguished families in 1847. Like many scions of the 19th-century Prussian elite, he began military training at a young age and received a commission in time to serve in the Austro-Prussian War (1866).

As a young officer, Hindenburg was also present at Versailles for the formal unification of the German Empire, a moment he later called one of the proudest in his life.

He served in the military for 45 years, rising to the rank of general before retiring to his sizeable estate in 1911. But the 66-year-old Hindenburg was recalled in 1914, given command of the Eighth Army and tasked with defending East Prussia from a Russian offensive.

Hindenburg’s leadership on the Eastern Front produced great victories between 1914 and 1916, though his talented subordinates and the incompetent bungling of Russian commanders also contributed to these.

In mid-1916, Hindenburg was appointed as Chief of the German General Staff, replacing Erich von Falkenhayn, who had been discredited by his lack of progress at Verdun. Hindenburg became Germany’s military commander, though many important command decisions were in fact made by his deputy Erich von Ludendorff.

From late 1916, both Hindenburg and Ludendorff both exerted considerable influence over the government. During this period, Germany became a de facto military dictatorship.

Two of Hindenburg’s decisions contributed to Germany’s capitulation in 1918. He was largely responsible for the policy of unrestricted submarine warfare, imposed over the objections of civilian politicians. This antagonised the Americans and contributed to their entry to the war in 1917.

Despite these blunders, Hindenburg remained as chief of staff until early 1919 and enjoyed considerable popularity among the German people.

He was elected president of the German republic in 1925, by a people nostalgic for nationalism, strong leadership and military strength. It was as president that Hindenburg committed his greatest folly: appointing Adolf Hitler as chancellor of the republic in January 1933.