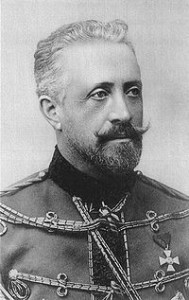 Nicholas Nikolaevich (1856-1929) was a Russian royal and the country’s military commander-in-chief for the first 12 months of the war.

A grand duke of the Romanov family, Nikolaevich was a grandson of Tsar Alexander I and the son of a prominent military commander. Like many other young royals, the teenage Nikolaevich was given training as a cavalry officer and encouraged to become a career military officer.

Commissioned in 1872, Nikolaevich participated in the Russo-Turkish War (1877-78) where he served with distinction. His military service thereafter was as a St Petersburg staff officer, concerned with training, logistics and planning.

During the 1905 Revolution in Russia, Nikolaevich was called upon by his cousin, Tsar Nicholas II, to restore order through martial law, an order Nikolaevich defiantly refused.

In 1914, the tsar appointed Nikolaevich commander of all Russian armies in Europe. Nikolaevich was liked and respected, both by his generals and the enlisted ranks, but he was unprepared for the enormity of this task. He had not seen combat for more than 30 years and had no experience of commanding an army in the field.

With no clear strategic plan of his own, Nikolaevich simply refereed debates between his generals, while serving as a figurehead. In August 1915, the tsar sacked Nikolaevich and assumed command of the armies himself, a move that would have its own disastrous consequences.

Nikolaevich later led a Russian army in the Caucasus, with some success, before fleeing Russia after the revolution of 1919.

Title: “Nicholas Nikolaevich (Russia)”
Authors: Jennifer Llewellyn, Steve Thompson
Publisher: Alpha History
URL: https://alphahistory.com/worldwar1/nicholas-nikolaevich-russia/
Date published: July 20, 2017
Date accessed: September 19, 2021
Copyright: The content on this page may not be republished without our express permission. For more information on usage, please refer to our Terms of Use.