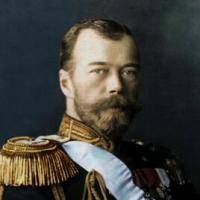 Nicholas II (1868-1918) was head of the Romanov dynasty and the Tsar of Russia. He was overthrown in March 1917 following a revolution caused chiefly by World War I.

The son of the autocratic Alexander III, the future tsar was unlike his powerful father: he was short, quiet and reserved, with only a passing interest in the business of government.

In late 1894, Nicholas married Alix of Hesse, a strong-willed German princess. It was a marriage of love rather than political convenience and they remained close and affection all their lives.

Nicholas’ 23-year reign was marred by errors and misjudgements. In 1904, the Tsar’s attempts to expand Russian influence in Asia led his country into a brief but disastrous war with Japan. The following year, Nicholas survived a popular but disorganised attempt at revolution, chiefly by making promises of reform that were later broken.

The Tsar led his empire into World War I, blinded by a naive belief that the German Kaiser, Wilhelm II, would not wage war against his own cousin.

In September 1915, after a year of Russian military defeats, disasters and ineptitude, Nicholas took charge of the army and left for the Eastern Front. Though he interfered little in command decisions, the Tsar’s direct association with the war, along with his absence from the Russian capital, proved fatal for his regime.

When a protest in the Russian capital Petrograd developed into a revolution in February and March 1917, Nicholas hastened back to Petrograd He was stopped en route by civilian politicians, who demanded his abdication.

The war brought about the end of three centuries of tsarist rule under the Romanovs and paved the way for the rise of the Bolshevik revolution (October 1917) and a socialist regime in Russia.

The tsar and his family were held under house arrest for a time. A proposed plan to send them to exile in Britain was rebuffed. The Romanovs were eventually executed by communist partisans in July 1918.

Title: “Nicholas II (Russia)”
Authors: Jennifer Llewellyn, Steve Thompson
Publisher: Alpha History
URL: https://alphahistory.com/worldwar1/wilhelm-ii-germany/
Date published: July 8, 2017
Date accessed: July 03, 2022
Copyright: The content on this page may not be republished without our express permission. For more information on usage, please refer to our Terms of Use.