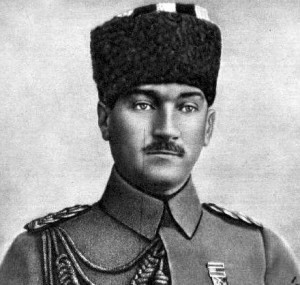 Mustafa Kemal Ataturk (1881-1938) was a prominent Ottoman military commander in World War I and, later, the founder of modern Turkey.

Born in Salonica, Mustafa Kemal was the son of a civil servant, who encouraged him to enter one of the empire’s military academies. He graduated in 1905, received an officer’s commission and was given his first posting.

In 1908, Kemal participated in the ‘Young Turk’ revolution, which replaced the Ottoman sultanate with a constitutional ruler. He later served in the empire’s unsuccessful wars against Italy (1911-12) and the Balkan League (1912-1913).

When the Ottomans entered World War I in late 1914, Kemal, by now a colonel, was tasked with defending the Dardanelles from a probable Allied landing. Though short of men and equipment, Kemal’s astute analysis of both the terrain and Allied military objectives allowed him to organise a robust yet well-planned defence of the peninsula.

The victory at Gallipoli revived Ottoman hopes of keeping the empire together, while Kemal was promoted and given more significant command postings.

Between 1916 and 1918 he served against the Russians in the Caucasus, against British imperial forces in Palestine and as an envoy to Germany.

By 1918, Kemal was convinced that the Allies would win the war so his interests turned towards securing the future of his homeland.

Kemal is best known for his leadership of the Turkish War of Independence (1919-22) and his long tenure as Turkey’s first republican president. The surname Ataturk, meaning ‘father of the Turks’, was bestowed on him in 1934.